“The lot is cast into the lap, but its every decision is from the Lord.”
Proverbs 16:33

In the Old and New Testaments lots were cast for many important decisions. Proverbs 16:33 is central to understanding that the ancient Jews and Christians believed God’s will could be determined by the casting of lots. This random form of determining an outcome is called “cleromancy” coming from the Greek word kleros meaning “lot, inheritance.” We get our words “clerk, “clergy” and “cleric” from kleros probably because in ancient times those positions were originally chosen by lot and/or were inherited. 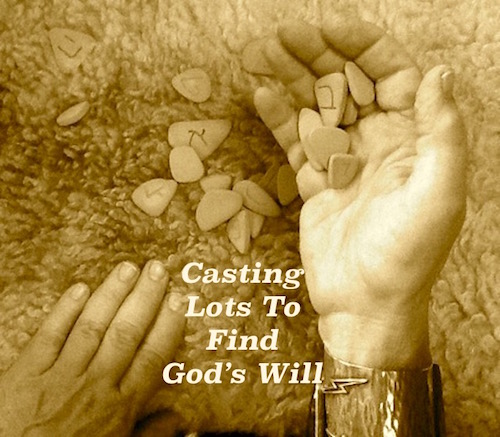 Perhaps the most famous casting of lots in the Bible is the casting of lots by the Roman soldiers who crucified Jesus. At a crucifixion, soldiers were allowed to take from the crucified any thing they thought of value and Jesus’ robe was particularly attractive to them so they did not want to divide it into four equal parts.

“When the soldiers had crucified Jesus, they divided His garments into four parts, one for each soldier, with the tunic remaining. It was seamless, woven in one piece from the top to bottom. So they said to one another, ‘Let’s not tear it, but instead let us cast lots to see who will get it.’ This was to fulfill the Scripture: ‘They divided My garments among them, and cast lots for My clothing.’ So that is what the soldiers did.” (The ancient prognostication of this act which the writer has italicized comes from Psalm 22:18, written c. 1000 BC, a millennium before Jesus/Messiah was even born.) John 19:23, 24

From the Book of Jonah we learn that Phoenician (?) sailors were casting lots in the 8th century BC. The Jewish prophet Jonah was told by God to go to Nineveh and tell them if they did not repent, they would be destroyed. Jonah hated the Ninevites and boarded a ship going in the opposite direction. But one cannot run away from God. A huge storm came up and the whole crew was terrified and wanted to know who was responsible for the possible sinking of them and the ship, so— “they cast lots and the lot fell on Jonah. 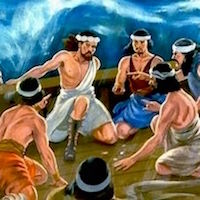 They asked him, ‘Tell us, who is responsible for making all this trouble for us? What kind of work do you do? Where do you come from? What is your country? From what people are you?’ He answered, ‘I am a Hebrew and I worship the Lord, the God of heaven, who made the sea and the dry land.’ This terrified them and they asked, ‘What have you done?’ (They knew he was running away from the Lord, because he had already told them so.)

The sea was getting rougher and rougher. So they asked him, ‘What should we do to you to make the sea calm down for us?’ ‘Pick me up and throw me into the sea,’ he replied, ‘and it will become calm. I know that it is my fault that this great storm has come upon you.’” Jonah 1:7-12

Most know “the Lord prepared a great fish to swallow up Jonah; and Jonah was in the belly of the fish three days and three nights.” Jonah 1:17 Not a WHALE but a specially-created BIG FISH. 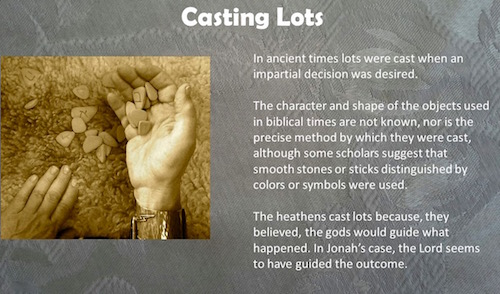 In the Old Testament, lots were cast for very important decisions: the distribution of priestly offices in the Temple was divided by casting lots (I Chronicles 24) as was the division of land among the twelve tribes of Israel: “Joshua then cast lots for them in Shiloh in the presence of the LORD, and there he distributed the land to the Israelites according to their tribal divisions.” Joshua 18:10

Some of the castings of lots seem to be a way to solve a problem rather than a very important decision: in Nehemiah 10:34 lots are cast to determine when should and which tribe would bring wood for the altar and in Leviticus 16:8 lots are cast to decide which of two goats should be the scapegoat.

What were those “lots” in those times? We know the Romans had dice, so that was a way of determining.

CLICK HERE for article: Dice in the Ancient World

After the Apostle Judas had betrayed Jesus and committed suicide, “(Peter said) ‘Therefore it is necessary to choose one of the men who have been with us the whole time the Lord Jesus went in and out among us, beginning from John’s baptism to the time when Jesus was taken up from us. For one of these must   become a witness with us of his resurrection.’ So they proposed two men: Joseph called Barsabbas (also known as Justus) and Matthias. Then they prayed, ‘Lord, you know everyone’s heart. Show us which of these two you have chosen to take over this apostolic ministry, which Judas left to go where he belongs.’ Then they cast lots, and the lot fell to Matthias; so he was added to the eleven apostles.” Acts 1:21-26

It was crucial to the remaining 11 Apostles that the number 12 Jesus had chosen be completed again. They chose as candidates two equally qualified disciples, prayed, cast lots and Matthias was chosen.

In our own day this random selection of people to receive money is still done in our LOTteries and in LOTto, both named after “the casting of LOTs.” 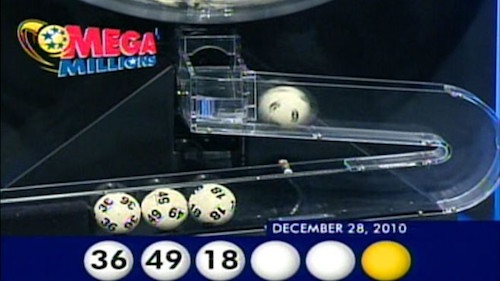 On November 2012 the Coptic Orthodox Church in Egypt chose its Pope, Tawadros II, by drawing lots. Some modern churches in order to avoid popularity contrasts or hurt feeling are going back to using “casting of lots” by drawing names out of a box or hat to select deacons or elders.

Even though casting lots in the form of dice, drawing straws and flipping coins are nowadays only used as idle games by most people, as recent as 2006, a federal judge named Gregory Presell (right) from the Middle District of Florida settled a contentious debate over an insignificant argument by using the random game of rock-paper-scissors, a hand game dating to the Chinese Han Dynasty from 206 BC to 220 AD:

“The ruling in Avista Management v. Wausau Underwriters stated: Upon consideration of the Motion – the latest in a series of Gordian knots that the parties have been unable to untangle without enlisting the assistance of the federal courts – it is ORDERED that said Motion is DENIED. Instead, the Court will fashion a new form of alternative dispute resolution, to wit: at 4:00 P.M. on Friday, June 30, 2006, counsel shall convene at a neutral site agreeable to both parties. If counsel cannot agree on a neutral site, they shall meet on the front steps of the Sam M. Gibbons U.S. Courthouse, 801 North Florida Ave., Tampa, Florida 33602. Each lawyer shall be entitled to be accompanied by one paralegal who shall act as an attendant and witness…. 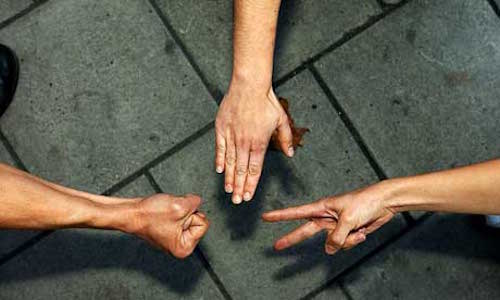 At that time and location, counsel shall engage in one (1) game of ‘rock, paper, scissors.’ The winner of this engagement shall be entitled to select the location for the 30(b)(6) deposition to be held somewhere in Hillsborough County during the period July 11-12, 2006.”

But in the early, middle and modern periods of the Christian Church the casting of lots was and is usually forbidden after the coming of the Holy Spirit at Pentecost. Our indwelling Wisdom is supposed to make up for our uncertainties.—Sandra Sweeny Silver