The Roman gourmand Marcus Gabius Apicius lived during the reign of the Emperor Tiberius (14-37 AD). He is described by a near-contemporary, the poet Martial (c. 40-c. 103 AD) in his Epigrams 3.22 :  “After you’d spent 60 million on your stomach,  Apicius, 10 million still remained. An embarrassment, you said, fit only to satisfy mere hunger and thirst. So your last and most expensive meal was poison…Apicius, you never were more a glutton than at the end.” Apicius even had a hunger to taste death.

Apicius is famous for three things: living large gastronomically, committing suicide because he only had millions of dollars left to buy food and writing the first surviving European cookbook called in  English On The Subject Of Cooking. From that cookbook we know how those in the upper classes of ancient Rome ate and especially what spices and sauces they used to flavor their foods. However, the preponderance of Romans, including early Christians, did not have the sesterces (Roman money) to buy the foods and access the products that the fabulously wealthy Apicius did.

This blogger always prefers ancient texts to find out about ancient events and people like Apicius rather than modern speculations 2,000 years later. Athenaeus, living during the time when much about Apicius was still current, was a Greek rhetorician who flourished during the end of the 200’s and the beginning of the 300’s AD. He is known for a fascinating book in fifteen parts called in Greek Deipnosophistae, meaning Dinner-Table Philosophers. The book is a compendium of information about the Greco-Roman world of dining, music, courtesans, dancing and all things entertaining. He says of Apicius:

“About the time of Tiberius there lived a man named Apicius, very rich and luxurious; from whom several kinds of cheesecakes are called Apician. He spent countless sums on his belly, living chiefly at Minturnae, a city of Campania, eating very expensive crawfish (lobsters) which are found in that place superior in size to those of Smyrna, or even to the (lobsters) of Alexandria.

Hearing too that (lobsters)) were very large in Africa, he sailed thither, without waiting a single day, and suffered exceedingly on his voyage. But when he came  near the place, before he disembarked from the ship,  for the news of his arrival had spread amongst the Africans, the fishermen came alongside in their boats and brought him some very fine (rock/spiny lobsters); and he, when he saw them, asked if they had any finer; and when they said that there were none finer than those which they brought, he, recollecting those at Minturnae, ordered the master of the ship to sail back the same way into Italy, without going near the land….

When the future emperor Trajan was in Parthia (Iran), at a distance of many days’ journey from the sea, Apicius sent him fresh oysters, which he had kept fresh by a clever contrivance of his own.”

The Roman Stoic philosopher Seneca (4 BC-65 AD), one among many in the ancient world who were fascinated with the story of Apicius, writes in his Consolatio ad Helviam 10: “Apicius, having spent a fortune of 100 million silver sestertii (c. $325,000,000.) on his kitchen, spent all the gifts he had received from the Imperial court, and thus swallowed up his income in lavish hospitality. Apicius found that he had only 10 million sestertii (c. $32,500,000.) left. Afraid of dying in relative poverty, he poisoned himself.”

Pliny was a Roman philosopher and naturalist. In Natural History 8.209 he writes: “Based on existing methods of producing goose liver (foie gras), Apicius devised a similar method of producing pork liver. He fed his pigs with dried figs and slaughtered them with an overdose of muslum (honeyed wine).” For thousands of years, including in our            modern world, gourmands have loved foie gras. The ancient Egyptians force-fed geese over 4,000 years ago.

For those who are against force-feeding or “gavage,” you are in good company: “I tell you it will be more tolerable for the Fejee that salted down a lean missionary in his cellar against a coming famine; it will be more tolerable for that provident Fejee, I say, in the day of judgment, than for thee, civilized and enlightened gourmand, who nailest geese to the ground and feastest on their bloated livers in thy pate-de-foie-gras.” Herman Melville Moby Dick  (1851)

We know Apicius was innovative: he found a way to make foie gras from the livers of pigs rather than from the livers of ducks or geese. He invented a method 2,000 years ago to keep fresh oysters fresh all the way from the Persian Gulf to the interior of Iran. Importantly, Pliny says Apicius advises us that “flamingo’s tongue has a flavor that is superb.” Natural History 10.133  All of us would not have know that unless Apicius had so advised. 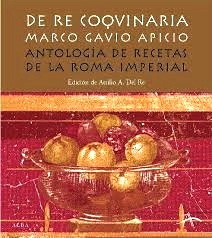 Apicius became famous for hundreds of years after he died because of his eating excesses and the folly of his suicide because he only had millions left to spend on food. He is famous in some circles now for his ancient cookbook, De re coquinaria. But it has been 1,500 years since we have called a delicious dish “Apician” and most people have never heard of this delusional poor soul and few can even pronounce his name. “Apickeeus” or “Apisheeus.”—Sandra Sweeny Silver