It appears that dancing is an innate “thing” within mankind. Man has always beat on certain things and done rhythmic beating. This causes people to tap their feet to the sounds and/or to get up and “dance” to the beat.

Today in Mexico City one can still see the ancient Aztec dances of their forebears. Groups of “Aztecs/Mexicans” perform street dances for visitors. Dressed as nearly as they can in ancient Aztec clothes and feathers, they dance in rhythm to the drum beats they imagine were those of the ancient AZTECS ( c. 1345–1521 AD).

The oldest proof we have of the existence of dancing comes from the c. 9000 year-old cave paintings in India called the Bhimbetka rock shelters. The images show crudely-drawn humans dancing together and alone. (This writer, artistically-challenged, still draws humans like the cave people did.) 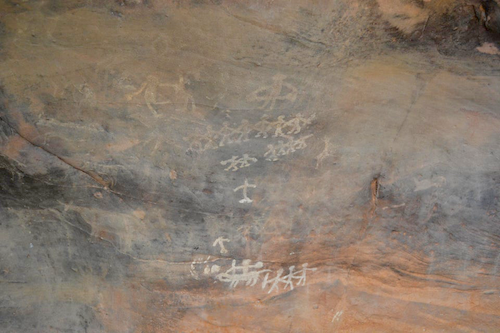 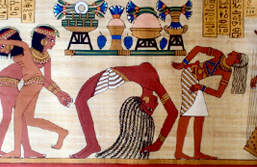 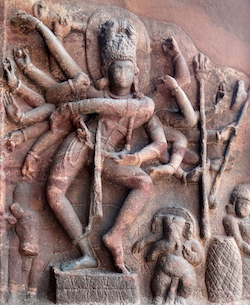 There are many paintings in Egyptian tombs from c. 3,000 to c. 2,750 BC showing Egyptian women dancing (left).

The Hindu and Jain Badami cave temples from c. 600’s AD are located in Badmai, India. Hinduism has over 300 million gods and goddesses. Shiva is the god of gods among them. The Hindu deities often have many arms, many legs and many eyes. Dancing Shiva, the god of the gods, is in Cave 1 of the temple troglodytique dédié à Shiva, Badami, Inde (right).

In modern India there is a special “dance” call Kathakali, a Hindu performance art. Below is a video on “Eye Dancing,” in ancient India’s art of Kathkali. 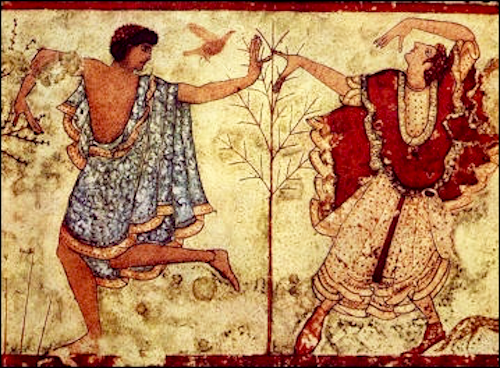 Even the goddesses of Greek mythology known as the Three Graces, Charities, danced.

The most famous ancient dance comes from the Bible. The Roman ruler of Galilee Herod Antipas (c. 21 BC—39 AD ) had a step-daughter Salome who performed a dance for Herod at his birthday party. It had a very dramatic ending:

“For Herod had sent and seized John, and bound him in prison for the sake of Herodias, his brother Philip’s wife; because he had married her. For John said to Herod, “It is not lawful for you to have your brother’s wife.”

And Herodias had a grudge against him, and wanted to kill him. But she could not, for Herod feared John, knowing that he was a righteous and holy man, and kept him safe. When he heard him, he was much perplexed; and yet he heard him gladly.

But an opportunity came when Herod on his birthday gave a banquet for his courtiers and officers and the leading men of Galilee. For when Herodias’ daughter came in and danced, she pleased Herod and his guests; and the king said to the girl, “Ask me for whatever you wish, and I will grant it.” And he vowed to her, “Whatever you ask me, I will give you, even half of my kingdom.” And she went out, and said to her mother, “What shall I ask?” And she said, “The head of John the baptizer.”

And she came in immediately with haste to the king, and asked, saying, “I want you to give me at once the head of John the Baptist on a platter.” And the king was exceedingly sorry; but because of his oaths and his guests he did not want to break his word to her.

And immediately the king sent a soldier of the guard and gave orders to bring his head. He went and beheaded him in the prison, and brought his head on a platter, and gave it to the girl; and the girl gave it to her mother.

It seems most of ancient dancing was a “fun-thing” or an integral part of a ritual or a “command performance.” Most of the time dancing was done by females. There is no reference to dancing in the New Testament (except Salome’s dance), but many references to dancing in the Old Testament. Most Old Testament verses refer only to praising God or to confer wisdom. King David’s son Solomon wrote in c. 1000 BC:

Earlier yet (c. 1500 BC) Miriam, Aaron’s and Moses’ sister danced: “Then Miriam the prophet, Aaron’s sister, took a timbrel in her hand, and all the women followed her, with timbrels and dancing. Miriam sang to them:

“Sing to the Lord,
for he is highly exalted.
Both horse and driver
he has hurled into the sea.” Exodus 15:20-21

In 586 BC the Babylonian King Nebuchadnezzar II (reigned 605 BC – c. 562 BC) invaded and destroyed not only the First Temple in Jerusalem but Jerusalem itself.

The Old Testament book of Lamentations is a series of laments in poetry for the emptiness of Jerusalem and the Temple after the destruction. No more joy, music or dancing—because Israel temporarily “forgot God.”

“The elders have left the city gate; the young men have stopped their music. Joy has left our hearts; our dancing has turned to mourning. The crown has fallen from our head. Woe to us, for we have sinned! Lamentations 5:14-16 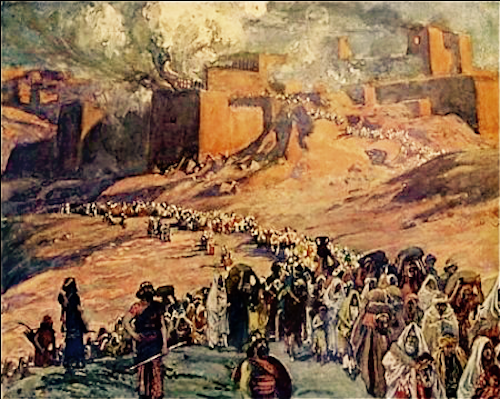 As the ark of the Lord was entering the City of David, Michal daughter of Saul watched from a window. And when she saw King David leaping and dancing before the Lord, she despised him in her heart.” II Samuel 12-16 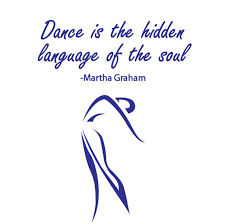 David the king of the Jews in c. 1000 was obviously dancing with just his “ephod” (garment worn by the high priests) on because he wanted to be able to really dance for joy without his robes. The reader can decide whether his wife was mad at his dancing or mad because he only had an ephod on.— Sandra Sweeny Silver