In September of 1945 in the area of a suburb of Jerusalem called Talpioth a small (11 feet by 11 feet) ancient burial chamber was discovered containing 14 ossuaries. An ossuary is a receptacle into which bones of the dead are placed. The bones in ancient ossuaries are often hard to date, but in this chamber there were pottery shards and a coin struck in the reign of Agrippa I between 41-44 AD. The shards and coin, according to Professor Sukenik (1889-1953) of Hebrew University, indicate the tomb had been sealed before 45 AD and he believed it to be an extremely early Christian burial site. Ossuary #7 has an inscription written in charcoal: “JESOUS IOU.”

Professor Sukenik suggested the reading of the inscription is “Jesus Woe,” but later scholars are not sure what IOU means. However, IOU is the Biblical Greek translation of the Biblical Hebrew YEHU. It is, therefore, fairly obvious that the Greek IOU on the ossuary is a transliteration of YEHU/JEHU meaning “the Lord is he.” Alternatively, IOU could be the shortening of the Greek name for Jesus, IESOUS, Ιησους, to IOU. There are countless ancient Biblical scripts in all languages with the name of Jesus in them.

On the cover of Ossuary #8 is carved in Greek: “JESUS THE NAME OF THE FATHER.” There are large crosses drawn in charcoal on each of the four sides of this ossuary. Sukenik suggested this is the first “pictorial expression” for “He is crucified.” After his exciting discovery, Sukenik published an article in The American Journal of Archaeology in its October-December 1947 issue: “All our evidence indicates that we have in this tomb the earliest records of Christianity in existence. It may also have a bearing on the historicity of Jesus and the crucifixion.”

Professor Sukenik played a crucial role in the establishment of the Department of Archaeology at Hebrew University in Jerusalem and was the first to recognize the importance of the Dead Sea Scrolls.

Before the formal establishment of Israel in 1948, Sukenik clandestinely acquired three of the Dead Sea scrolls from a Christian Arab antiquities dealer in Bethlehem. In the same year he published an article tentatively linking the scrolls to a community called the Essenes. Over 70 years later, his hypothesis is widely accepted. His son Yigael Yadin (nee Yigael Sukenikr) who died in 1984 at the age of 67 was Chief of Staff of the Israel Defense Forces and was, also, like his father an archaeologist. 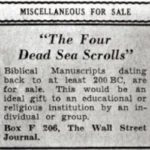 An ad placed in the Wall Street Journal on June 1, 1954 by one Mar Samuel aka Metropolitan Samuel offering “The Four Dead Sea Scrolls” for sale was called to Yadin’s attention. With the aid of intermediaries and benefactors, Yadin purchased the four scrolls for $250,000.

Yadin’s father Professor Sukenik, also, identified Ossuary #1 in the ancient burial chamber he discovered as belonging to “SIMEON BARSABA(S).” Since “Barsaba(s)” was not a known Jewish last name at the time of Jesus, Sukenik believed the ossuary perhaps held the bones of the father of two New Testament men, Joseph Barsabas and his brother Judas Barsabas:

“Wherefore of these men which have companied with us all the time that the Lord Jesus went in and out among us, beginning from the baptism of John, unto that same day that he was taken up from us, must one be ordained to be a witness with us of his resurrection.

And they appointed two, Joseph called Barsabas, who was surnamed Justus, and Matthias. And they prayed, and said, Thou, Lord, which knowest the hearts of all men, shew whether of these two thou hast chosen,that he may take part of this ministry and apostleship, from which Judas by transgression fell, that he might go to his own place. And they gave forth their lots; and the lot fell upon Matthias; and he was numbered with the eleven apostles.” Acts 1:21–26 KJV 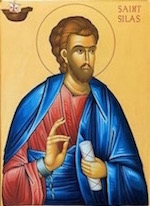 “Then the apostles and elders, with the whole church, decided to choose some of their own men and send them to Antioch with Paul and Barnabas. They chose Judas (called Barsabbas) and Silas, men who were leaders among the believers….Judas and Silas, who themselves were prophets, said much to encourage and strengthen the believers. After spending some time there, they were sent off by the believers with the blessing of peace to return to those who had sent them.” Acts 15:22, 32,33 NIV

Archaeology has vindicated the historical truths in the Bible over and over again since the 1800’s. As Sukenik’s son, Yigael, has been quoting as saying of his digs, his modus operandi was “to hold the Bible in one hand and a spade in the other.”

Five years after his father Simeon’s tomb was sealed, one of Simeon Barsabas’ sons, perhaps Judas Barsabas, leaves Antioch for Jerusalem in Acts 15:22 in c. 50 AD. We hear no more of him in the Bible.

Unfortunately both father and son Sukenik are dead and we will see no more their seminal contributions through archeology to Biblical accuracy and authenticity.—Sandra Sweeny Silver