Many do not know the story of the prostitute Rahab who saved Joshua’s Jewish spies from the hands of the King in Jericho. The town of Jericho was the first major town the Jews conquered near Their Promised Land. This all takes place c. 1400’s BC.

“Then Joshua son of Nun sent two men secretly from (the Israelite’s camp) as spies, saying, ‘Go, view the land, especially Jericho.’ So they went, and entered the house of a prostitute whose name was Rahab, and spent the night there. The king of Jericho was told, ‘Some Israelites have come here tonight to search out the land.’ Then the king of Jericho sent orders to Rahab, ‘Bring out the men who have come to you, who entered your house, for they have come only to search out the whole land.’ But the woman took the two men and hid them. Then she said, ‘True, the men came to me, but I did not know where they came from. And when it was time to close the gate at dark, the men went out. Where the men went I do not know. Pursue them quickly, for you can overtake them.’ She had, however, brought them up to the roof and hidden them with the stalks of flax that she had laid out on the roof. 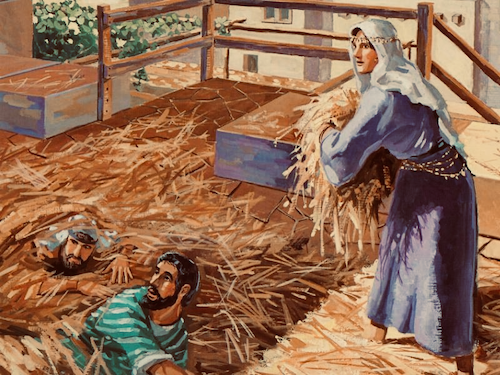 So the men pursued them on the way to the Jordan as far as the fords. As soon as the pursuers had gone out, the gate was shut.

Before they went to sleep, she came up to them on the roof and said to the men: ‘I know that the Lord has given you the land, and that dread of you has fallen on us, and that all the inhabitants of the land melt in fear before you. For we have heard how the Lord dried up the water of the Red Sea before you when you came out of Egypt, and what you did to the two kings of the Amorites that were beyond the Jordan, to Sihon and Og, whom you utterly destroyed. As soon as we heard it, our hearts failed, and there was no courage left in any of us because of you. The Lord your God is indeed God in heaven above and on earth below. Now then, since I have dealt kindly with you, swear to me by the Lord that you in turn will deal kindly with my family. Give me a sign of good faith that you will spare my father and mother, my brothers and sisters, and all who belong to them, and deliver our lives from death.’ The men said to her, ‘Our life for yours! If you do not tell this business of ours, then we will deal kindly and faithfully with you when the Lord gives us the land.’ 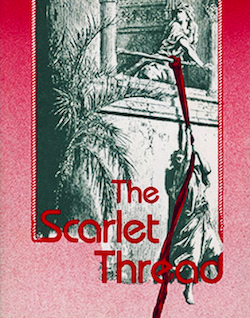 Then she let them down by a rope through the window, for her house was on the outer side of the city wall and she resided within the wall itself. She said to them, ‘Go towards the hill country, so that the pursuers may not come upon you. Hide yourselves there for three days, until the pursuers have returned; then afterwards you may go on your way. The men said to her, ‘We will be released from this oath that you have made us swear to you if we invade the land and you do not tie this crimson cord in the window through which you let us down, and you do not gather into your house your father and mother, your brothers, and all your family. If any of you go out of the doors of your house into the street, they shall be responsible for their own death, and we shall be innocent; but if a hand is laid upon any who are with you in the house, we shall bear the responsibility for their death. But if you tell this business of ours, then we shall be released from this oath that you made us swear to you. She said, ‘According to your words, so be it.’ She sent them away and they departed. Then she tied the crimson cord in the window.” Joshua 2:1-21

“On the seventh day, they (the Jews) got up at daybreak and marched around the city seven times in the same manner, except that on that day they circled the city seven times. The seventh time around, when the priests sounded the trumpet blast, Joshua commanded the army, “Shout! For the Lord has given you the city! The city and all that is in it are to be devoted to the Lord. Only Rahab the prostitute and all who are with her in her house shall be spared, because she hid the spies we sent. But keep away from the devoted things, so that you will not bring about your own destruction by taking any of them. Otherwise you will make the camp of Israel liable to destruction and bring trouble on it. All the silver and gold and the articles of bronze and iron are sacred to the Lord and must go into his treasury.” When the trumpets sounded, the army shouted, and at the sound of the trumpet, when the men gave a loud shout, the wall collapsed; so everyone charged straight in, and they took the city. “ Joshua 6:15-20 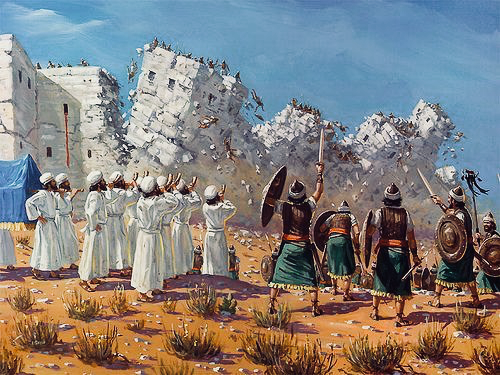 Most skeptics and others have little belief in this story of a miraculous happening in Jericho. But in 1907-09 German excavations under Carl Watzinger  uncovered a part of the northern city wall of Jericho where the poor and undesirable lived. That 8 ft high portion of Jericho did not fall.

The Old and New Testaments treat Rahab the harlot very well. We know from Joshua 6:25 that:

“But Joshua spared Rahab the prostitute, with her family and all who belonged to her, because she hid the men Joshua had sent as spies to Jericho—and she lives among the Israelites to this day.”

Rahab, the Canaanite/Gentile prostitute not only lived with the Israelites after the Fall of Jeriicho in the 1400’s BC but she married a Jewish man, Salmon, whose father had been with Moses. 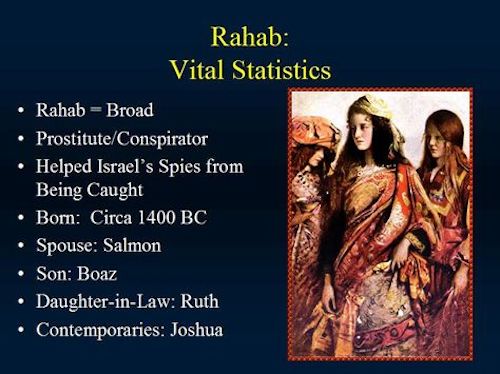 Rahab and Salmon had a Son named Boaz who, also, intermarried with a Gentile named Ruth. The book of Ruth in the Old Testament is, perhaps, the oldest recorded love story. Ruth and Boaz had a child Obed who was the grandfather of King David

MOST IMPORTANTLY, Rahab the Prostitute/Harlot is in the blood line of Jesus of Nazareth, Our Savior. The New Testament opens with her name included in the genealogy of Jesus:

(David had  Bathsheba’s husband killed so he could marry her—II Samuel 11:1-17)

As can be seen in Jesus’ genealogy, there are many saints, many sinners in Jesus’ blood-line. and many just ordinary sinful people like you and me.

In the New Testament Rahab is an example of a woman of FAITH:

“By faith the prostitute Rahab, because she welcomed the spies, was not killed with those who were disobedient.” Hebrews 11:31

Because the wall where her house was located did not come down.

“In the same way, was not even Rahab the prostitute considered righteous for what she did when she gave lodging to the spies and sent them off in a different direction?” James 2:25

BUT there is “redemption” for you and me. “If we confess our sins (God through Christ) is faithful and just to forgive us our sins and to cleanse us from all unrighteousness.” I John 1:9 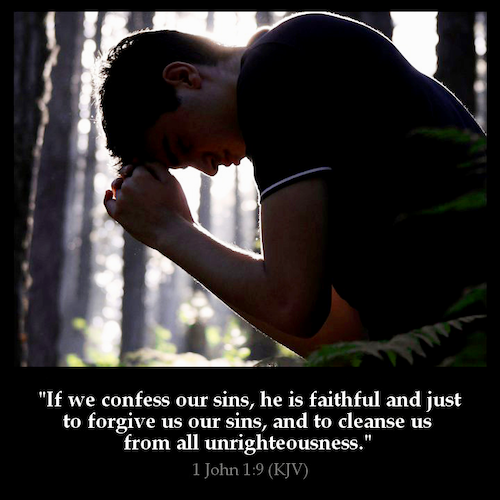 In Old Testament times it was Rahab’s FAITH in the Jewish God Yahweh that obtained her safety and her family’s safety from the destruction of Jericho.—Sandra Sweeny Silver