The symbol of Christ on the Cross called the staurogram is derived from two Greek words: σταυρός” (stauros), meaning “an upright pale or stake” used by the Romans to crucify people and the Greek word σταυρόω (stauroo), meaning “to drive in stakes.” The Greek word “gram” comes from “gramma,” which means “letters” or “written.” The Greek meaning is “a written cross.”

The staurogram is a monogram: “a motif made by overlapping or combining two or more letters or other graphemes to form one symbol.” The staurogram is composed of two Greek letters superimposed over each other: the tau (written t) and the rho (written p).

The staurogram is known as the TAU/RHO symbol. The CHI/RHO symbol was used much more in art and in the catacombs than the TAU/RHO was.

It is interesting to observe the staurogram as a pictograph: “a pictorial symbol for a word or phrase.” Pictographs were the earliest known form of writing, examples having been discovered in Egypt and Mesopotamia from before 3000 BC.” 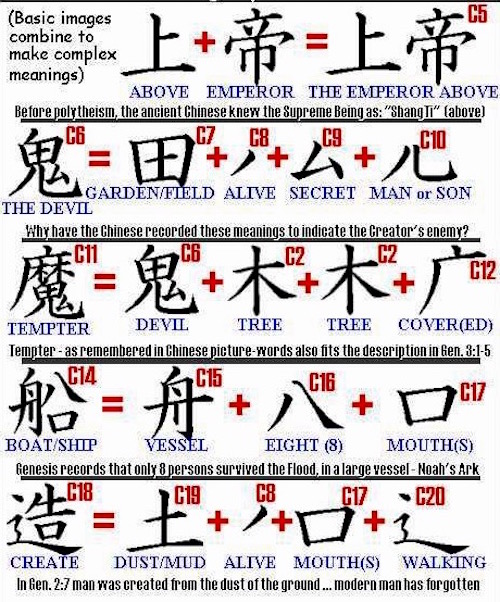 Perhaps the most obvious staurograms/pictographs depicting Christ and the crucifixion are in ancient texts. Bodmer Papyrus 75, discovered in the 1950’s, is an early Greek New Testament papyrus containing about half the text of two Gospels: Luke and John. Its earliest date is 175-225 AD. Here one can “see” (circled) Christ on the Cross (the tau) with His head “drooping” (the rho). Staurograms serve as the earliest images of Jesus on the cross, predating other Christian crucifixion imagery by 200 years. 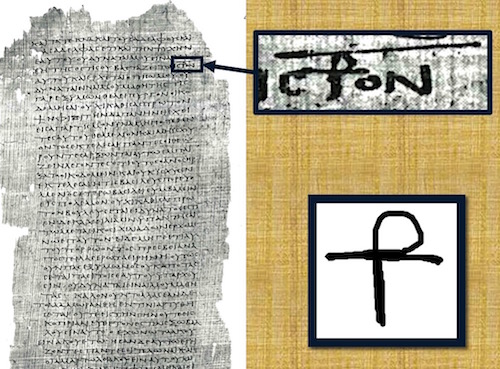 In the two above “written pictures” one can see the New Testament scribe either reproducing an already known symbol for Christ on the Cross (the Tau/Rho) or poetically forging what is the oldest “pictorial representation” of Christ, (as some believe about this monogram in the Bodmer Papyri 75 ) .

It is true there is no representation of Christ on the Cross in the catacombs. There are Christian symbols there: the Good Shepherd, the Chi Rho, the dove, the phoenix, the tree of life, the anchor, the Alpha/Omega, etc.

Even the Cross itself is not represented in Christian art until after Constantine became Emperor of Rome (reigned 306 to 337 AD) and signed the Edict of Milan in 313 which gave Christians the freedom to worship.

It was after the 313 AD Edict of Milan that Christians started to worship openly and to display the Cross. Over the centuries they gradually abandoned their covert symbols such as the Tau/Rho and Chi/Rho and Ichthus, the Fish symbol.

CLICK HERE  for article on Christ and the Ichthus Symbol 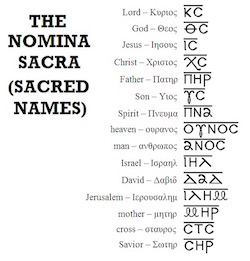 The staurogram is one of the many nomina sacra (“sacred names”) used in ancient Christian texts to abbreviate common words the scribes would use.

For her own private abbreviations, this writer often uses: X (Chi) for Christ (first letter in “Christ”) and a ϴ (Theta) for God—in Greek theos, meaning “God” begins with a theta. Am sure everyone has private abbreviations. Sometimes—even on their bodies. (See arm tattoo right of a staurogram, “Luke” in Greek and 14:27 in Roman numerals—Loukas XIV:XXVII).

“And whoever does not carry their cross and follow me cannot be my disciple.” Luke 14:27—Article by Sandra Sweeny Silver