Tucked away at the end of the New Testament between III John and the Book of Revelation is Jude’s 25-verse Epistle.

Jude begins his letter (c. 68), as was common in ancient times, with identifying who he is. In the Greek it reads: “Ioudas Iesou Christou doulos adelphos de Iakobou.”

CLICK for article on  Letter Writing in he Ancient World

The Greek word ἀδελφός, meaning “brother” is a masculine noun from ἄλφα (G1) (as a connective particle) and delphus, meaning the “womb.” The root word in Greek does denote “a womb/blood” connection.

Jude’s brother James in the first verse of his book of James in the New Testament (c. 60’s) , also, identifies himself as the “slave, the doulos, of God and of Jesus Christ”: “Iάκωβος, Θεοῦ καὶ Κυρίου ᾿Ιησοῦ Χριστοῦ δοῦλος.” Literally the words translate into English as “Jacob God and Lord Jesus Christ a slave.”

So the two brothers worshipped Jesus and thought of themselves as “slaves” to Him, bought and paid for by Jesus Christ. The word doulos in Greek means “slave,” but over the centuries that word has been translated to the more genteel word “servant,” even though the softening hurts the subjection.

Over several millennia there has been a controversy as to whether these two New Testament writers were the “brothers of Jesus.” The meaning “a brother of Jesus” would mean that they were the actual children of Mary and Joseph. 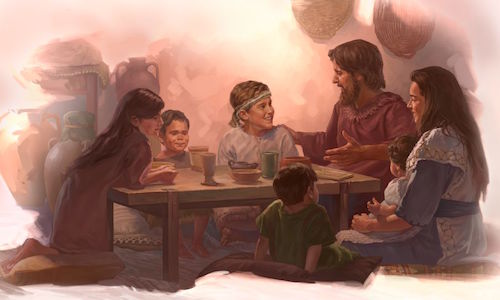 There is no controversy about the fact that Mary was a virgin and had not had sex before Jesus’ birth. All Christians everywhere believe the Bible when it states:

“The angel went to her (Mary) and said, ‘Greetings, you who are highly favored! The Lord is with you.’ Mary was greatly troubled at his words and wondered what kind of greeting this might be But the angel said to her, ‘Do not be afraid, Mary; you have found favor with God. You will conceive and give birth to a son, and you are to call him Jesus. He will be great and will be called the Son of the Most High. The Lord God will give him the throne of his father David, and he will reign over Jacob’s descendants forever; his kingdom will never end.’ ‘How will this be,’ Mary asked the angel, ‘since I am a virgin?’

The angel answered, ‘The Holy Spirit will come on you, and the power of the Most High will overshadow you. So the holy one to be born will be called the Son of God. Even Elizabeth your relative is going to have a child in her old age, and she who was said to be unable to conceive is in her sixth month. For no word from God will ever fail.’ ‘I am the Lord’s servant,’ Mary answered. ‘May your word to me be fulfilled.’ Then the angel left her.” Luke 1:28-38

“This is how the birth of Jesus the Messiah came about: His mother Mary was pledged to be married to Joseph, but before they came together, she was found to be pregnant through the Holy Spirit. Because Joseph her husband was faithful to the law, and yet did not want to expose her to public disgrace, he had in mind to divorce her quietly. But after he had considered this, an angel of the Lord appeared to him in a dream and said, ‘Joseph son of David, do not be afraid to take Mary home as your wife, because what is conceived in her is from the Holy Spirit.  She will give birth to a son, and you are to give him the name Jesus, because he will save his people from their sins.’ All this took place to fulfill what the Lord had said through the (8th century BC prophet Isaiah7:14): ‘The virgin will conceive and give birth to a son, and they will call him Immanuel’ which means ‘God with us.’

When Joseph woke up, he did what the angel of the Lord had commanded him and took Mary home as his wife. But he did not consummate their marriage until she gave birth to a son. And he gave him the name Jesus.” Matthew 1:18-25

Many in the Catholic (meaning in Greek “universal, general”) faith believe Mary never had sex with her husband Joseph after she birthed Jesus. They believe, though a married woman, she lived and died a virgin. This doctrine is called The Perpetual Virginity of Mary, meaning Mary and Joseph never consummated their marriage. The Aeiparthenos (Ever Virgin) title is widely used in Eastern Orthodox liturgy.

This extra-Biblical belief has had many opponents and many adherents over the centuries. Theologians and philosophers have argued about and written treatises on the pros and cons of Mary’s Perpetual Virginity.

”Then the man brought me back to the outer gate of the sanctuary, the one facing east, and it was shut. The Lord said to me, ‘This gate is to remain shut. It must not be opened; no one may enter through it. It is to remain shut because the Lord, the God of Israel, has entered through it.’ The prince himself is the only one who may sit inside the gateway to eat in the presence of the Lord. He is to enter by way of the portico of the gateway and go out the same way.’” Ezekiel 44:1-3

Ezekiel (c. 593—c. 571 BC) Chapter 44 is about instructions relating to the Future Temple, the priests, admonitions, instructions, gates, Levites, linen, shaving heads, circumcised hearts and minds, etc., but hidden in the 2nd verse, using a gate, is Biblical proof of the Perpetual Virginity of the Mother of our Lord, according to those who use this Biblical verse as Scriptural proof of Mary’s Perpetual Virginity. In this context then, the gate is not one of the inner/outer/east/west gates in the verses in chapter 44, but is the vagina, metaphorically of course, and has “to remain shut…not be opened” because ‘the Lord, the God of Israel (meaning Jesus) has entered through it.” The Marians and some theologians in the Catholic Church are very devoted to Mary, the mother of our Lord and Savior.

Protestants (meaning in Latin “testify/protest before”) revere Mary greatly as the Mother of the Savior of the world but do not believe Mary was a perpetual virgin. In the story of Mary’s birth of Jesus with her husband Joseph as attendant, the Bible states in Matthew 1:25: “But he (Joseph) did not consummate their marriage until she gave birth to a son.” NIV translation

The Douay-Rheims translation of the Bible, the official Bible of the Catholic Church, translated that verse from the Greek into Latin by the theologian/ascetic St. Jerome (347-420). The English translation is: “And he knew her not till she brought forth her first born son: and he (Joseph) called his name Jesus.”

The Greek Biblical words “did not consummate their marriage UNTIL she gave birth to a son” and the Catholic Bible’s translation from the Latin Vulgate ‘“he knew her not TILL she brought forth her FIRST BORN son” both indicate that Mary was a virgin when she conceived and birthed Jesus. But after her cleansing period, Joseph and Mary did have normal conjugal relations. The Catholic translation, also, calls Jesus “her first born son” implying there was possibly another or other sons.

There are many verses in the New Testament that indicate Mary and Joseph had other sons and daughters. In the following verses the words “brother/brethren” all use the Greek words adelphos/adelphoi meaning “from the womb.”

Matthew 12:46-49 KJV
”While he (Jesus) yet talked to the people, behold, his mother and his brethren stood without, desiring to speak with him. Then one said unto him, ‘Behold, thy mother and thy brethren stand without, desiring to speak with thee.’ But he (Jesus) answered and said unto him that told him, ‘Who is my mother? and who are my brethren?’ And he stretched forth his hand toward his disciples, and said, ‘Behold my mother and my brethren!’”

(55) “Is not this the carpenter’s son? is not his mother called Mary? and his brethren, James, and Joses, and Simon, and Judas?

(56) And his sisters, are they not all with us? Whence then hath this man (Jesus) all these things?”

Mark 6:2, 3 NIV
“When the Sabbath came, he began to teach in the synagogue, and many who heard him were amazed. ‘Where did this man get these things?’ they asked. ‘What’s this wisdom that has been given him? What are these remarkable miracles he is performing? Isn’t this the carpenter? Isn’t this Mary’s son and the brother of James, Joseph, Judas and Simon? Aren’t his sisters here with us?’ And they took offense at him.”

Mark 3:31-34 Douay-Rheims (Official Vulgate translation of the Catholic Bible)
“And his mother and his brethren came; and standing without, sent unto him, calling him. And the multitude sat about him; and they say to him: ‘Behold thy mother and thy brethren without seek for thee.’ And answering them, he said: ‘Who is my mother and my brethren?’ And looking round about on them who sat about him, he saith: ‘Behold my mother and my brethren. For whosoever shall do the will of God, he is my brother, and my sister, and mother.’”

John 2:1 NIV
“On the third day there was a wedding in Cana of Galilee, and the mother of Jesus was there.”

John 2:12 KJV
“After this (wedding) he went down to Capernaum, he, and his mother, and his brethren, and his disciples: and they continued there not many days.”

Acts 1:14 ESV
“All these with one accord were devoting themselves to prayer, together with the women and Mary the mother of Jesus, and his brothers.”

I Corinthians 9:5,6 Douay-Rheims, 1899 American Edition (DRA)
“Have we not power to carry about a woman, a sister, as well as the rest of the apostles, and the brethren of the Lord, and Cephas? Or I only and Barnabas, have not we power to do this?”

Galatians 1:19 “I saw none of the other apostles except James, the Lord’s brother.”

For those who would like to pursue further the Catholic Church’s beliefs about Mary, see the link below—Sandra Sweeny Silver

Mary in the Catechism of the Church