The Battle for Jerusalem in 70 AD pitted the Roman army against the Jews. The Jews were guerrilla fighters and often in the months between April and July/August bested the most powerful army on earth at that time. That fact made the Roman General Titus furious at his men. As a show of strength in contrast to the Jews’ arrows, the Romans retaliated with the Big Bertha of catapults called the Wild Ass (Onanger) because of the powerful kick generated by the recoil as the machine released stones. The Onanger catapulted 75 lb. stones over 1,300 feet: 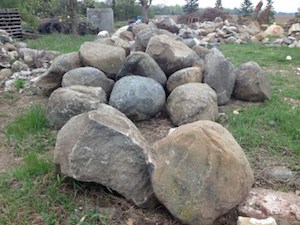 “The stones that were cast were of the weight of a talent (c. 71lbs.) and were carried two furlongs (1,320 feet) and farther. The blow they gave was no way to be sustained, not only by those that stood first in the way, but by those that were beyond them for a great space. As for the Jews, they at first watched the coming of the stone, for it was of a white color and could therefore not only be perceived by the great noise it made, but could be seen also before it came by its brightness. Accordingly when the watchmen that sat upon the towers gave them notice when the engine was let go and the stone came from it, they cried out aloud in their own country language (Aramaic), ‘The son cometh.’” Josephus, Wars of the Jews 5.6.3 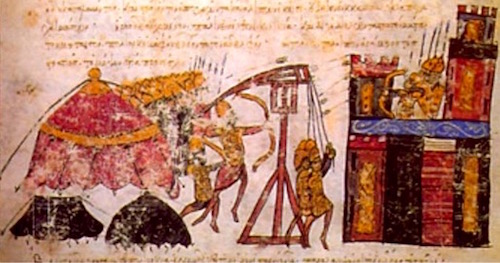 Catapults of various configurations and other engines of war have been used by armies since very ancient times.

King Zhou of China in the 700’s BC used a machine called the hui against the Duke of Zheng. Scholars from the Han Dynasty (206 BC-220 AD) interpreted that obsolete word to mean “catapult.”

Perhaps the original idea for the catapult came from the use of slingshots. A slingshot could have been “invented” early in man’s history. The idea would have meant that a single hunter with a slingshot could stun/kill an animal for food, etc. One will never know the origin of the idea for the catapult because no evidence of a slingshot has been found in the archeology of early man. But we do have the example of the boy shepherd David as early as c.1000 BC in the Bible who used a sling shot to take down a 9’ 6” giant called Goliath: 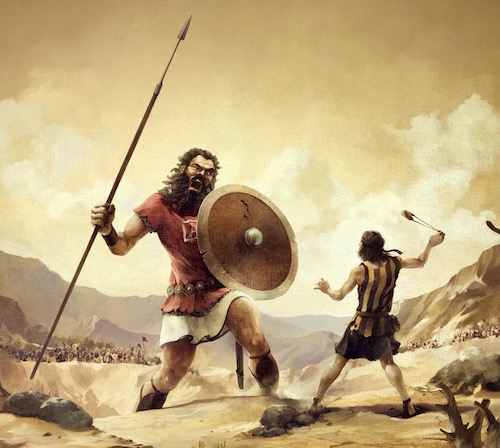 “As (Goliath) moved closer to attack him, David ran quickly toward the battle line to meet him. Reaching into his bag and taking out a stone, he slung it and struck the Philistine on the forehead. The stone sank into his forehead, and he fell facedown on the ground. So David triumphed over the Philistine with a sling and a stone; without a sword in his hand he struck down the Philistine and killed him.” I Samuel 17:48-50

Perhaps the crossbow, invented by the Chinese in c. 700 BC, was the origin of the catapult? It like the catapult uses a “firing” mechanism by pulling a lever back which fixes the projectile in place on the bowstring. When the lever is released, the arrow is fired. The sketch on the right depicts a Chinese Lian Nu (連弩), multiple shot crossbow without a visible nut or cocking aid. The crossbow attempted to increase the range and power of the very early bow and arrow.

Most studies on catapults circle around medieval weapons. During the Middle Ages catapults were the kings of the engines of war. Every mainly offensive battle had its catapult or trebuchet:

The difference between a catapult and a trebuchet, coming from French trebuchier meaning “to overthrow, topple,” is with the catapult the arm holding the projectile bends as it is pulled down and the spring action as it straightens hurls the projectile. With a trebuchet the stone is at one end of the middle arm and a heavier weight is at the other end. When the spring action, the catch, is released, the heavier weight swings down and the stone is slung forward. A large trebuchet with 10-ton counterweights could hurl 300-pound wall-smashing boulders as far as 300 yards.

In addition to hurling insults at the attackers from the walls of fortresses or castles and attackers hurling stones at the insult-throwers, the choice of projectiles using catapults is long and gnarly:

Charles Spurgeon (1834-1892) was an English Baptist preacher/warrior who occasionally catapulted his words into his church and the words often were felt outside his church.

“A man must have a stout digestion to feed upon some men’s theology; no sap, no sweetness, no life, but all stern accuracy, and fleshless definition. Proclaimed without tenderness, and argued without affection, the gospel from such men rather resembles a missile from a catapult than bread from a Father’s hand.” — Article by Sandra Sweeny Silver