“(In c. 1928 BC) after Jacob came from Paddan Aram, he arrived  safely at the city of Shechem in Canaan and camped within sight of the city. For a hundred pieces of silver, he bought from the sons of Hamor, the father of Shechem, the plot of ground where he pitched his tent. There he set up an altar and called it El Elohe Israel (”El Is The God Of Israel” or “Mighty Is The God of Israel”). Genesis 33:18-20

Jacob stayed a long time in the land he bought from Shechem’s sons (Genesis 33:19), so he must have dug a well there. Several thousand years later, Jesus of Nazareth had a famous encounter with a Samaritan woman at Jacob’s Well:

“…he had to go through Samaria. So he came to a town in Samaria called Sychar (modern Askar) near the plot of ground Jacob had given to his son  Joseph. Jacob’s well was there, and Jesus, tired as he was from the journey, sat down by the well. It was about the sixth hour (noon). When a Samaritan woman came to draw water, Jesus said to her. ‘Will you give me a drink?’ His disciples had gone into the town to buy food. The Samaritan woman said to him, ‘You are a Jew and I am a Samaritan woman. How can you ask me for a drink? For the Jews do not associate with Samaritans.’ Jesus answered her, ‘If you knew the gift of God and who it is that asks you for a drink, you would have asked him and he would have given you living water.’ ‘Sir,’ the woman said, ‘you have nothing to draw with and the well is deep. Where can you get this living water? Are you greater than our father Jacob, who gave us the well and drank from it himself, as did also his sons and his flocks and herds?’….

The woman said, ‘I know that Messiah…is coming. When he comes, he will explain everything to us.’ Then Jesus declared, ‘I who speak to you am he’….leaving her water jar, the woman went back to the town and said to the people, ‘Come, see a man who told me everything I ever did. Could this be the Messiah?’….Many of the Samaritans from that town believed in him because of the woman’s testimony….they urged him to stay with them, and he stayed two days. And because of his words many more became believers.” John 4:4-41

It is interesting to note it was to this non-Jewish woman at Jacob’s Well Jesus first declared in no uncertain words that He was the Messiah: “I who speak to you am he.” (Verse 4:26) Jacob’s Well in this narrative resonated not only to the spiritually thirst-quenching power of Jesus but reverberated 2,000 years back to Jesus’ relative, Jacob (Matthew 1:2), the son of Isaac, the grandson of Abraham who was promised by God that the Messiah would come from his seed: “…through your offspring all nations on earth will be blessed.” Genesis 22:18

2,000 years after Jesus’ encounter with the woman at Jacob’s Well, that same now 4,000 year-old Well is in a Greek Orthodox Compound in Bir Ya’Qub near the Samaritan/Palestinian city of Nablus in the West Bank. It is revered by Jews, Christians, Muslims and modern-day Samaritans.

Philoumenos was the caretaker monk at the Monastery of Jacob’s Well when in November of 1979, a fanatical Jewish group broke into the church and demanded Philoumenos take down all icons and crosses because this was a Jewish site.

Philoumenos pointed out to them that Jacob’s Well had been taken care of by Christians for 1,600 years and had before that time been in the hands of Samaritans for 800 years. So it had not been in Jewish hands for almost 2,500 years. The mob left and warned the monk if he did not take down the Christian symbols, there would be consequences. Several days later in a torrential downpour, the group broke into the small church as Philoumenos was doing vespers:

“They burst into the monastery and with a hatchet butchered Archimandrite Philoumenos in the form of a cross. With one vertical stroke they clove his face, with another horizontal stroke they cut his cheeks as far as his ears. His eyes were plucked out. The fingers of his right hand were cut into pieces and its thumb was hacked off. These were the fingers with which he made the sign of the cross. The murderers were not content with the butchering of the innocent monk, but proceeded to desecrate the church as well. A crucifix was destroyed, the sacred vessels were scattered and defiled, and the church was in general subjected to sacrilege of the most appalling type (a grenade was thrown into the small church).”—All Saints of North America Russian Orthodox Church, Holy Hieromartyr Philoumenous)

In 2009 Philoumenos was made a saint by the Greek Orthodox Church. He is one of many  contemporary Christian martyrs.

CLICK for article: “21st Century Martyrs in the Sudan and Nigeria.”

CLICK for article: “Modern persecution of Christians In China.”

The chopping off, one by one, of the thumb and four fingers Philoumenos used to make the sign of the cross strongly indicates he was tortured and asked to denounce his Christian faith before he was hatcheted to death.—No arrests have ever been made.

Today the c. 135’ deep well with a circumference of 7.6’ has a new church over it and visitors are led down the steps to the crypt that houses the 4,000 BC well where c. 2,000 years later Jesus had His friendly encounter with the Samaritan woman and where c. 2,000 years after Jesus, there occurred a heinous, deadly encounter between Jews and a Christian priest.—Sandra Sweeny Silver 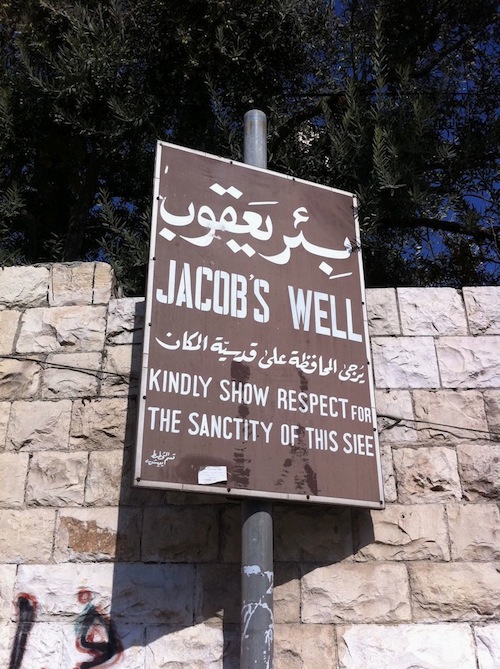