“I recall the astonishment with which I first noted the unique position of Sparta amongst the states of Hellas, the relatively sparse population, and at the same time the extraordinary power and prestige of the community. I was puzzled to account for the fact. It was only when I came to consider the peculiar institutions of the Spartans that my wonderment ceased.” Xenophon, Polity of the Lacedaemonians (Spartans)

In the 2nd century BC apocryphal book I Maccabees 14:16-23 the ancient town of Sparta is mentioned: “To Rome, to Sparta itself, came tidings of Jonathan (Maccabee’s) death (c. 160’s BC), and was heard right sorrowfully. When they learned that his brother Simon had been made high priest instead, master now of the land and all its cities, (Sparta) wrote to Simon on tablets made of bronze, to renew the treaty of friendship they had with his brethren, Judas and Jonathan, before him; and their letters were read out before the whole assembly at Jerusalem. The Spartans wrote in these words following: ‘The rulers and commonalty of Sparta, to the high priest Simon, the elders and priests and all the people of the Jews, greeting. Welcome news your ambassadors have brought us, of fame and credit and prosperity you enjoy. And their errand stands recorded in our public annals; how Numenius son of Antiochus and Antipater son of Jason came on the Jews’ part to renew our old treaty of friendship with you; how the people resolved to give them fair greeting, and to lay up a copy of their report in the public archives, that should preserve the memory of it among the Spartan people; and how an account of all this was sent to the high priest Simon.’”

Proud Sparta, the strong, the militaristic, the invincible would never have sent such letters of friendship or allied themselves with the strong Jewish Maccabees or any other force or nation when Sparta was what it was in its glory days in the 500‘s to the mid-300’s BC. 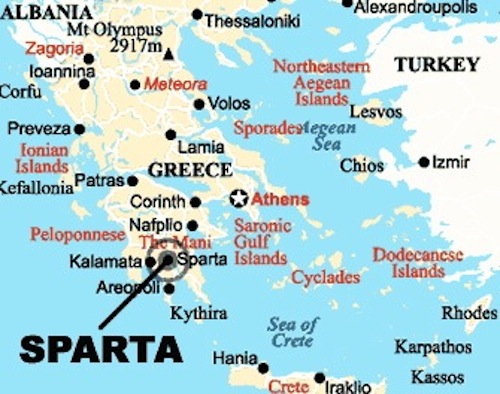 Sparta who threw away babies who did not seem strong at birth and took its sons away from their mothers at age 6 to begin their training as soldiers and fed their little boys “only so much per day” so they would learn to live on less; the Sparta who in August of 480 BC at the Pass at the Battle of Thermopylae with only 300 men commanded by their King Leonidas held off the Persian invaders under Xerxes I for three days even though they were outnumbered 20 to 1. Only one Spartan soldier survived that battle. Those 300 Spartiates who killed 20,000 Persians in three days was long gone in the time of the Maccabees or in Rome’s heyday. 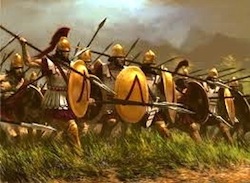 Spartan soldiers dressed in crimson because they felt it was more manly. Many armies after them adopted crimson dress for battle in emulation of the legendary warrior Spartans. Over the decades, the Spartan’s continual conquering had 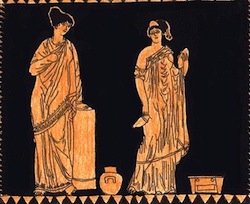 brought them fame and wealth and they gradually became dissipated and enervated. The old Spartan discipline and rigorous standards became lax. Because of the murder of their “unfit” male babies and their ideal of death on the battle field, Spartan women outnumbered their men, owned much of the land, had equal rights with the men and enjoyed inheritance rights.

By 371 BC Sparta contributed only 2,000 warriors to fight Thebes at the Battle of Leucra. During the battle, some of the Spartan forces were scattered and and in disarray. The Thebans defeated the Spartans but felt so sorry for the failure of such a once-renowned Spartan army that they let the remaining prisoners go home. That battle was the end of an era the world still remembers. The new kids on the Mediterranean block, the Romans, were on the warpath in 206 BC when they invaded but did not destroy Sparta.The Romans were ascending as The Power in the known world. At the Battle of Corinth in 146 BC the Romans took on the Achaean League, all of Greece, and defeated them, destroyed the city of Corinth and became masters of Greece. Rome would be invincible for hundreds of years until Rome was defeated in 312 AD by a people who had no standing army, no weapons except prayer, no leader except God and nothing to give but their blood–the Christians. The answer to the question: “Could ancient Sparta defeat ancient Rome?” is absolutely not. Sparta was in its dotage when Rome was entering its manhood.

Could Sparta in its prime in the 400-300’s BC have defeated Rome? Yes, because in that time slot Rome was still organizing itself, was becoming a Republic, was figuring out its method of fighting and ruling, was trying to have little victories over its enemies on the Italian peninsula and was just beginning to pay its soldiers a salary. Of course Sparta in its prime could have defeated Rome.

But Sparta and Rome were never at their prime at the same time, so the question is just an interesting speculation. But if one could have Rome in its prime time-travelled back to Sparta in its prime, this writer would bet the blood-colored, crimson–clad warriors of Thermopylae would defeat the elite-born legionnaires of Rome.

The Gospel was introduced to Greece by Paul in c. 50 AD. In the 300’s Eusebius, the first historian of the Early Church, reports that under the reign of Marcus Aurelius (161-180) the Bishop of Corinth wrote a letter to Sparta with “peace and unity and a catechism of orthodoxy” as its subject matters.The church in Sparta had bishops from the early 100’s until the modern times. The population today of Sparta is relatively sparse: c. 17,000. But Sparta’s name still endures as an emblem of a time when it was The Power in its world. Many other “The Powers” have come and gone over the millennia, but very few have their small city, their culture and their military prowess enshrined in most of the languages of the world. Sparta does.—Sandra Sweeny Silver