The prophet Jeremiah was called by Yahweh in c. 626 to tell the Jews in Jerusalem and surrounding areas that God was going to punish them if they did not repent and come back to Him.

They did not repent and in c. 586 the Babylonians destroyed Jerusalem. That was 40 years after Jeremiah had been called by God to warn them. That’s two generations to get ready. But the Jews never got ready.

“The Lord said to me, “From the north disaster will be poured out on all who live in the land. I am about to summon all the peoples of the northern kingdoms,” declares the Lord.

“Their kings will come and set up their thrones in the entrance of the gates of Jerusalem; they will come against all her surrounding walls    and against all the towns of Judah. I will pronounce my judgments on my people because of their wickedness in forsaking me, in burning incense to other gods and in worshiping what their hands have made.” Jeremiah 1:14-16

Jeremiah may have been about 20 years old when the Lord appointed him to deliver over and over again His warnings—BUT tucked in those awful prophecies God gives hopes in the future for the Jews and Jeremiah. With God there is always “hope for a future” to  build again and to plant again. 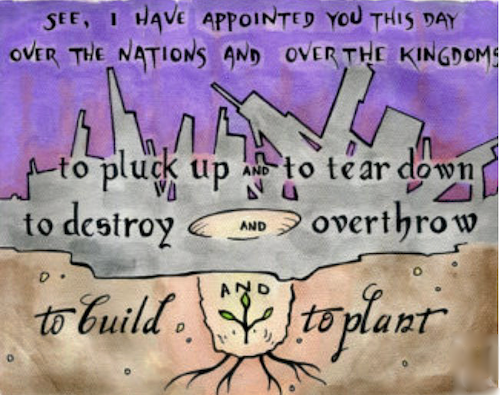 When the destruction of Jerusalem came, Jeremiah was c. 60 years old. For 40 years Jeremiah had been treated shamefully. Over the four decades, Jeremiah endured mockery, imprisonment, kidnapping, and death threats from the people he desperately tried to help. Jeremiah is called “the Weeping Prophet.” It is not because he weeps for his  many personal troubles,  but because Jeremiah weeps, mourns for what is coming to his people if they do not repent and return to God. They never paid any attention to this Weeping Prophet.

Jeremiah dictated to his scribe Baruch (Jeremiah 36:32) the book of Jeremiah and the Lamentations of Jeremiah. He gives us an up-close, eyewitness description of what really happened on that Jeremiah-predicted day in January of 587 when Nebuchadnezzar and his army began in earnest the Siege of Jerusalem. Here it is:

“In the ninth year of Zedekiah king of Judah, in the tenth month, (January 587 BC) Nebuchadnezzar king of Babylon marched against Jerusalem with his whole army and laid siege to it. And on the ninth day of the fourth month of Zedekiah’s eleventh year, the city wall was broken through. Then all the officials of the king of Babylon came and took seats in the Middle Gate: Nergal-Sharezer of Samgar, Nebo-Sarsekim a chief officer, Nergal-Sharezer a high official and all the other officials of the king of Babylon. When Zedekiah king of Judah and all the soldiers saw them, they fled; they left the city at night by way of the king’s garden, through the gate between the two walls, and headed toward the Arabah.

But the Babylonian army pursued them and overtook Zedekiah in the plains of Jericho.

They captured him and took him to Nebuchadnezzar king of Babylon at Riblah in the land of Hamath, where he pronounced sentence on him. There at Riblah the king of Babylon slaughtered the sons of Zedekiah before his eyes and also killed all the nobles of Judah. Then he put out Zedekiah’s eyes and bound him with bronze shackles to take him to Babylon. The Babylonians set fire to the royal palace and the houses of the people and broke down the walls of Jerusalem. Nebuzaradan commander of the imperial guard carried into exile to Babylon the people who remained in the city, along with those who had gone over to him, and the rest of the people. But Nebuzaradan the commander of the guard left behind in the land of Judah some of the poor people, who owned nothing; and at that time he gave them vineyards and fields.

Now Nebuchadnezzar king of Babylon had given these orders about Jeremiah through Nebuzaradan commander of the imperial guard: “Take him and look after him; don’t harm him but do for him whatever he asks.” So Nebuzaradan the commander of the guard, Nebushazban a chief officer, Nergal-Sharezer a high official and all the other officers of the king of Babylon  sent and had Jeremiah taken out of the courtyard of the guard. They turned him over to Gedaliah son of Ahikam, the son of Shaphan, to take him back to his home. So he remained among his own people.” Lamentations 39:1-14

The Lord gave His persistent and persecuted prophet Jeremiah words which would be  of comfort to him in the future. He would not spend the rest of his life in Babylon. He would live and die among his own people. One must imagine faith-full Jeremiah content.—Article by Sandra Sweeny Silver 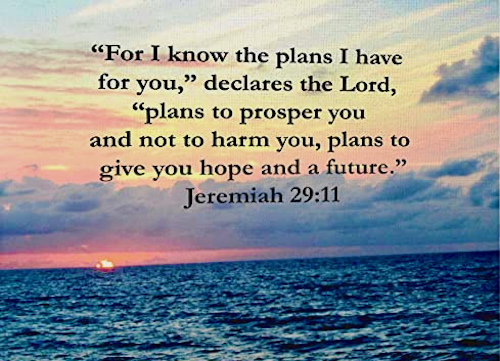