Lachish, an ancient city (now a park in southern Israel) has a very long history—a history of building Lachish/then destruction of Lachish. Lachish is mentioned in the book of Joshua in the Bible. Joshua (c.1300’s BC) was in command of the wandering Jews after the death of Moses. He fiercely fought for Canaan, the Promised Land God was giving to them—if they could take it:

“So Joshua and the Israelites defeated them completely, but a few survivors managed to reach their fortified cities.The whole army then returned safely to Joshua in the camp at Makkedah, and no one uttered a word against the Israelites.

Joshua said, “Open the mouth of the cave and bring those five kings out to me.” So they brought the five kings out of the cave—the kings of Jerusalem, Hebron, Jarmuth, Lachish and Eglon. When they had brought these kings to Joshua, he summoned all the men of Israel and said to the army commanders who had come with him, “Come here and put your feet on the necks of these kings.” So they came forward and placed their feet on their necks.

Joshua said to them, “Do not be afraid; do not be discouraged. Be strong and courageous. This is what the Lord will do to all the enemies you are going to fight.” Then Joshua put the kings to death and exposed their bodies on five poles, and they were left hanging on the poles until evening.

At sunset Joshua gave the order and they took them down from the poles and threw them into the cave where they had been hiding. At the mouth of the cave they placed large rocks, which are there to this day….

The Lord gave Lachish into Israel’s hands, and Joshua took it on the second day. The city and everyone in it he put to the sword, just as he had done to Libnah. Meanwhile, Horam king of Gezer had come up to help Lachish, but Joshua defeated him and his army—until no survivors were left.

Then Joshua and all Israel with him moved on from Lachish to Eglon; they took up positions against it and attacked it. They captured it that same day and put it to the sword and totally destroyed everyone in it, just as they had done to Lachish.

Then Joshua and all Israel with him went up from Eglon to Hebron and attacked it. Joshua subdued them from Kadesh Barnea to Gaza and from the whole region of Goshen to Gibeon. All these kings and their lands Joshua conquered in one campaign, because the Lord, the God of Israel, fought for Israel” Joshua 10:20-42 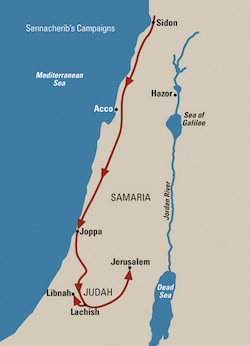 As can be seen from just these writings, Lachish and many ancient cities (left) were always targets of attacks—by other cities who feared they would attack them; or because a city’s armies were retaliating from previous attacks. The attacked cities all had to lick their wounds and build again. So it was for Lachish in ancient times.

After Joshua’s destruction, Lachish was incorporated into Judah. They rebuilt the city. Lachish had many good years of living and life UNTIL in c. 722 BC when the Assyrian King Sennacherib razed  Lachish to the ground—again.

The inscription in the ancient Assyrian relief below reads: “Sennacherib, the mighty king, king of the country of Assyria, sitting on the throne of judgment, before (or at the entrance of) the city of Lachish (Lakhisha). I give permission for its slaughter.” 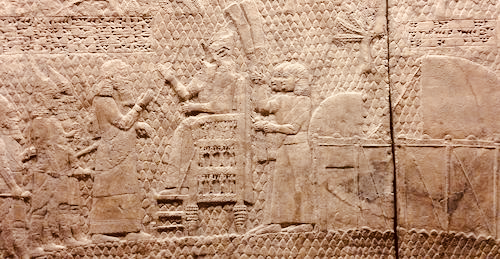 But the righteous Jewish King Josiah (c. 640-609 BC) rebuilt Lachish. Lachish was fortified as a fortress-city with lines of mud-brick walls on stone foundations. Lachish would protect Jerusalem, would be the “look-out” which could warn Jerusalem of approaching danger. Seems there was always “approaching danger” in that dangerous part of the Middle East in those many years.

Next, the Babylonians and their king Nebuchadnezzar were on the warpath in the 500’s BC and Jerusalem was his next target.

Needless to say, Lachish was razed to the ground again in 587 BC and Jerusalem was destroyed by the Babylonians in c.  586 BC.

That’s when the famous Lachish Letters were composed. First of all, they were not “letters” as we know them. They were ostraca, “a pottery shard with an inscription on it.” They were written on the shards with carbon ink.

Lachish’s and Jerusalem’s fall in the days when Jeremiah was giving warning to and weeping for their collective sins is illustrated in the Lachish Letters. The Letters were discovered on the floor of a burned guard house in Lachish by James L. Starkey in 1935 as they were continuing their excavations at Lachish.

The Babylonians had burned the guard house. Its walls collapsed on and preserved the letters because they were pottery shards.

Most of the letters were written by Hoshaiah who was a military officer reporting to his superior Yaush. The two men were to convey information to each other and sound the alarm to Jerusalem if they saw from their positions the approach of the Babylonians.

The letters are interesting because Hoshaiah is constantly defending himself from Yaush who is constantly criticizing him. Hoshaiah ingrates himself by calling himself “a dog.” Yaush berates Hoshaiah by asking Hoshaiah ”Can’t you even read?” This writer did not find any important information in the letters. But they do verify many Old Testament writings about the Babylonian incursion and the fears and follies of that time. They are, also, valuable because they contain common names in Israel mentioned in the Bible at that time. Primarily, the Letters confirm many Biblical passages.

One ostraca read: “To my lord Ya’osh. May Yahweh cause my lord to hear the news of peace, even now, even now. Who is your servant but a dog that my lord should remember his servant?'”

These final communications which mention the political and religious turmoil of the last days of Judah reveal the intensity of this time period and confirm that which was written in the Bible by the prophet Jeremiah:

“…while the army of the king of Babylon was fighting against Jerusalem and the other cities of Judah that were still holding out—Lachish and Azekah. These were the only fortified cities left in Judah.” Jeremiah 34:7

But Lachish  eventually fell again and was rebuilt again—-UNTIL—Alexander the Great began his Conquest of the World in c. 334 BC and, incidentally, destroyed Lachish along his way.—Sandra Sweeny Silver

CLICK HERE to read some of the Famous Lachish Letters