One must observe at the outset that the first century AD Paul the Apostle in the Bible was a big sports fan according to verses in his letters. He compares the Christian life to an athlete who is running an Olympic race:

“Do you not know that in a race all the runners run, but only one receives the prize? So run that you may obtain it. Every athlete exercises self-control in all things. They do it to receive a perishable wreath, but we an imperishable. So I do not run aimlessly; I do not box as one beating the air. But I discipline my body and keep it under control, lest after preaching to others I myself should be disqualified.” I Corinthians 9:24-27

“I press on toward the goal for the prize of the upward call of God in Christ Jesus.” Philippians 3:14

The ancient Chinese sport called Cuju meaning “kick ball” seemed to be similar to our football or soccer. As can be seen in the image, the hands and arms are not allowed and a player “scored” when he kicked the ball through two posts. The balls were usually leather stuffed with animal skins. Unlike the naked players in the West, these men in the East appear to be fully and fulsomely clothed and capped. For centuries Cuju was very popular in China especially with Liu Bang, founder of the Han Dynasty (206-220 AD), who had a Cuju court attached to his palace. Teams of 12 professional Cuju players entertained the Emperor and his guests.

There is this quote from the Old Testament Jewish prophet Isaiah c. 740-681 BC:

“Beware, the Lord is about to take firm hold of you
and hurl you away, you mighty man.
He will roll you up tightly like a ball
and throw you into a large country.” Isaiah 22:17,18 NIV

If the balls used in ancient Israel in the 700’s BC were like those used by the Egyptians several thousand years before them, they were sometimes made of leather or skin stuffed with bran or husks of corn, or of string and rushes covered with leather.

This very ancient picture of a ball game in c. 2500 BC (below) is from the tomb of the Egyptian Baqet III (BH 15), a sports-lover and provincial governor during Dynasty 11.

This game looks like a land variation of a game some play today in swimming pools where the top person tries to topple the other top person. But in this painting the top person apparently tries to catch the small balls thrown from the opposite top person. Notice the under persons are resolute and very steady and had to maneuver so their top person could catch the balls. Were the Egyptian players also nude? All sports and work-outs in gymnasiums in the ancient western world were done naked.

The first balls were probably made of winded rope but the balls below are made of linen and are nicely decorated.

This marble relief below of a man balancing a ball on his thigh is from the National Museum of Archeology in Athens. He is obviously teaching the boy who is watching him the correct technique. The ball is a follis, an inflated pig bladder stuffed and then wrapped in tight leather. This image is nowadays featured on the European Cup trophy. 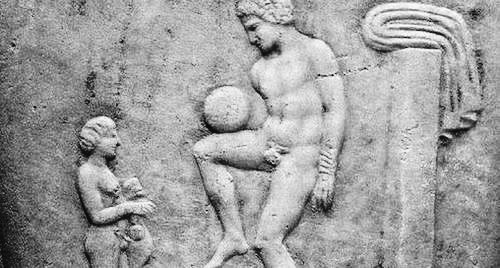 The ball seen in the relief is clearly a follis, an inflated ball. Early balls were made of linen and hair wrapped in string and sewn together. These did not bounce. Later Greek balls like this follis were made from inflated pig bladders, stuffed then wrapped in tight leather. Nearly all modern basketballs the size of the ancient follis have an inflatable inner rubber bladder, generally wrapped in layers of fiber and then covered with a surface usually made from leather.

In the Greek marble relief below (National Museum in Athens) one sees two men with their sticks to the ground ready to “get” a small ball. The men on the right and left have hooks in their hands. Those referees with switches or hooks have been portrayed over and over again on Greek and Roman reliefs featuring games of all kinds. Moderns recognize this game as Field Hockey. The ball here had to have been a very hard one perhaps made of stone covered with leather?

Man, and the word means “man” versus “mankind,” has always loved all kinds of sports and competitions. Maybe the first competition/sport was: who could get the most food for the clan? Certainly the very ancient paintings in the Lascaux caves in France illustrate man’s victories over wild beasts taken home and eaten. And there must have always been men who could wrestle other men to the ground better than other men; men who could outrun any man; men who were “better and more skilled” than others in bringing down beasts for food; etc.

“The mighty hunters” painted their hands on the walls in the Lascaux Caves in the French Dordogne region. “We were here and we did these great deeds with these hands.”— Sandra Sweeny Silver 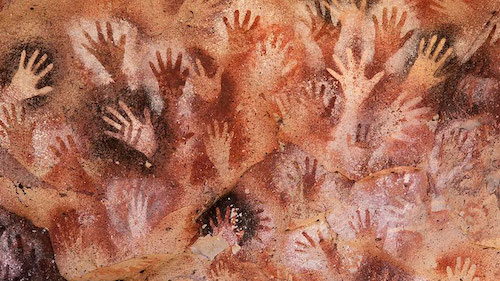