“Then Jesus said to them, ‘Suppose you have a friend, and you go to him at midnight and say, Friend, lend me three loaves of bread; a friend of mine on a journey has come to me, and I have no food to offer him.’   And suppose the one inside answers, ‘Don’t bother me. The door is already locked, and my children and I are in bed. I can’t get up and give you anything.’  I tell you, even though he will not get up and give you the bread because of friendship, yet because of your shameless audacity he will surely get up and give you as much as you need. So I say to you: Ask and it will be given to you; seek and you will find; knock and the door will be opened to you. For everyone who asks receives; the one who seeks finds; and to the one who knocks, the door will be opened. Which of you fathers, if your son asks for a fish, will give him a snake instead? Or if he asks for an egg, will give him a scorpion? If you then, though you are evil, know how to give good gifts to your children, how much more will your Father in heaven give the Holy Spirit to those who ask him!’” Luke 11:5-13

Jesus’ parable is obviously encouraging us to be persistent in prayer about our vital needs. He has just taught His disciples a pattern of prayer (Luke 5:1-10) and has moved on to an illustration, a parable of prayer. Bringing our needs before Him constantly, even at midnight, we are given assurance that God will answer those who ask, seek, knock and are earnest in their petitions. In this parable, the seeker needs to borrow three loaves of bread from a friend for a friend who has arrived at his house, unexpectedly, in the middle of the night. Because of his need for bread for a friend and his shameless begging for bread from his friend, he finally gets the bread and goes back to feed his famished friend. Jesus is telling His disciples: God is your friend. You are a friend of God. Ask Him, often and earnestly, and He will give gracious gifts to you.

Bread was for those in ancient Israel and Rome a daily necessity. For most people—Jews, Romans and early Christians—bread was more than half the calories they consumed each day. We are told in 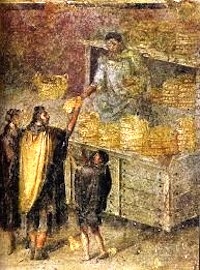 Ezekiel 4:9 how daily bread was made and what flours were used: “Further, take wheat, barley, beans, lentils, millet, and emmer (aka “farro,” today the most common wheat grown in Italy). Put them into one vessel and bake them into bread.” The simple formula of flour from grains and water from the well, mixed and baked is the Staff of Life and a Symbol of Life. Many early Christians were bakers who sold their loaves from stalls in local “markets” (in Hebrew “shuk,” in Latin “foro”). And we learn from this 2nd century AD ”Letter To Tusticus Barbarus To His Brother Pompeius” that bread was sent by friends and couriers over long distances: “Greetings, How come you haven’t answered my last letter if you received the loaves of bread I sent you? First I sent you 15 loaves with Popillius and Dutoporis, then I sent you another 15 as well as a vase with the carter Draco.” Ungrateful Tusticus. 30 loaves of daily bread and he didn’t even thank his brother!—Sandra Sweeny Silver