“Climate Change” is now a big phrase in our modern world. Another way to describe it is: “Global Warming.” It all has to do with CO2, carbon dioxide. What is carbon dioxide?

Definition: “Carbon dioxide (CO2) is an odorless, colorless gas. It is a waste product made by your body. Your blood carries carbon dioxide to your lungs. You breathe out carbon dioxide and breathe in oxygen all day, every day, without thinking about it.” There are over 7 billion people on the earth today who are inhaling oxygen and exhaling carbon dioxide.

“There are also, natural sources of atmospheric carbon dioxide, such as outgassing from the ocean, decomposing vegetation and other biomass, venting volcanoes, naturally occurring wildfires, and even belches from ruminant animals.” (Aha-that’s where the cancelling of cows originated.)

BUT the supposed main cause of Climate Change is YOU/US HUMANS: “Human sources come from activities like cement production, deforestation as well as the burning of fossil fuels like coal, oil and natural gas.”

It seems that when the Lord God first created the planet EARTH, HE placed Adam and Eve in a very toxic atmosphere:

“Volcanic eruptions spewed gases from Earth’s interior to the atmosphere, a process called outgassing that continues today. Most of the gas was carbon dioxide.”

A normal person knows that Climate Changes—daily, monthly, yearly—all the time. In fact, we have 4 seasons of Climate (“climate is the description of the long-term pattern of weather in a particular area”) Changes: Summer, Autumn, Winter and Spring.

In the 1st century AD Ephesus in ancient Roman times was one of the most important cities in the Ionian area. Because it was situated on the Aegean/ Mediterranean sea, it became a prosperous trading port. 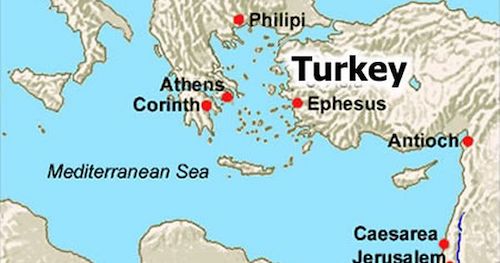 St. Paul (c. 5 to 64 or 67 AD) was the premier evangelist for the early Church. He always picked cities which were prominent in order to evangelize as many people as possible. Ephesus was one of those cities. Paul spent c. 2 and a half years, from c. 53-56 AD in Ephesus  bringing many Ephesians, itinerate traders, etc. to the Lord.

Ephesus was at the crossroads between the East and the West countries. Its main attraction was the Temple of Artemis, the Greek goddess of the hunt. The Temple was one of the Seven Wonders of the Ancient World. Artemis was the daughter of Zeus and the twin sister of Apollo. Her worship drew thousands of people every year to Ephesus.

At a bend in the Kaystros/Castros River Ephesus was originally built as a city. Over the many centuries the silt and rubble of the  Kaystros River enlarged the alluvial plain  and surrounded the city of Ephesus. Ephesus gradually was not on the shores of the Aegean Sea. The silt of the River gradually caused the whole coastline to move farther west. Try as they did, the Ephesians tried to dredge the River to preserve their city—futile. When water, earthquakes or any force of Nature is “on the move,” mankind is in danger.

In the New Testament Era, the area in the photo above  was actually part of the Aegean Sea, but due to silting —about 3 miles west of the  site of ancient Ephesus—it is now dry/marshland.

During the centuries, the Ephesians moved their city to the new water line over and over again—4 times to be exact. Plus the Cayster River  was by itself  moving its mouth in a different direction  and that caused another eruption to the city of Ephesus.

Finally, the Ephesians abandoned their city because of natural traumatic causes.  Ancient Ephesus’ harbor now is 6 miles from today’s water line. The wonderful fact is that the ruins of ancient Ephesus were left in tact, so modern tourists can still visit ancient Ephesus and its ancient, crumbling buildings, schools, temples, whore houses and libraries.

Even though most of the Ephesians had left the city, a 614 earthquake (another  natural disaster, not man-made), destroyed a lot of the city.  When they left ancient Ephesus, the Ephesians had to find a new harbor and new roads where they could continue their trading and prosperity.

“The area around Neopolis was found convenient by the Greek, Jewish, and Armenian merchants as a port in place of the port of Ephesus.

“Scala Nova” was the name of this new port which added a new trading center to the prior historical cities such as Ania, Melia, Phygale and Neopolis, that have created the early foundations of today’s Kusadasi.”

This New Ancient Ephesus is about 12 miles away from the Biblical Ephesus.

BTW—When Jesus was on the Cross, he gave his mother Mary into the care of his cousin John. It is not disputed that John took Mary to Ephesus with him and she died in that city.