“Infanticide” is a big word that hides the Latin word “cide” in it. Cide in Latin means “killer, the act of killing.” “Infanticide” is the “killing/murder of children.” “Suicide’ is the act of killing oneself—sui in Latin means “oneself” “Homicide” is the act of a human killing another human—homo is Latin for “man.” Then there’s the word for murdering your living son or daughter—“filicide” from the Latin word for son (filius) and for daughter (filia).

Roman law, religion and the entire ethos of the ancient world saw nothing morally wrong with infanticide or with abandoning their newborns on the dung heaps or garbage dumps of cities.

Romulus, the founder of Rome, had decreed back in the 8th century BC that no child could be killed “before” his third year “unless” he was deformed. However Romulus and his twin brother Remus (whom he killed, an act called “fratricide” from Latin words frater meaning “brother” and cide) were themselves abandoned by their mother to die, but a she-wolf suckled them until they were adopted by the shepherd Faustulus and his wife.

Even the so-called refined and educated Cicero (106-43 BC) in his On the Laws 3.8 states: “Deformed infants shall be killed.” The “deformity” could be an unwanted child (Latin exposti—“left without shelter”), a sickly child, a deformed child or simply a wrong sex child. The Stoic philosopher Seneca (4 BC-65 AD) comments casually in On Anger 1.15: “…mad dogs we knock on the head…unnatural progeny we destroy; we drown even children at birth who are weakly and abnormal.”

Even the preeminent and to this day influential Greek philosopher Aristotle recommends that parents should be compelled by law to expose deformed or handicapped babies. In Politics 7.1335b Aristotle says:

“As to exposing or rearing the children born, let there be a law that no deformed child shall be reared;  but on the ground of number of children, if the regular customs hinder any of those born being exposed, there must be a limit fixed to the procreation of offspring, and if any people have a child as a result of intercourse in contravention of these regulations, abortion must be practiced on it (the child).”

Plutarch in Lives: Lycurgus 16 writes that in State-controlled Sparta:

“Nor was it in the power of the father to dispose of the child as he saw fit (as was his right in most heathen societies). He was obliged to carry (the newborn) child before certain men at a place called Lesche; these men were some of the elders of the tribe to which the child belonged; their business was to carefully view the infant, and, if they found it stout and well made, they gave order for its rearing and allotted to it one of the nine thousand shares of land above mentioned for its maintenance, but, if they found it puny and ill-shaped, ordered it to be taken to what was called the Apothetae (“depository”), a (large cave) under Mt. Taygetus (in the Peloponnese); as thinking it neither for the good of the child itself, nor for the public interest, that it should be brought up, if it did not, from the very outset, appear to be healthy and vigorous.”

Some exposed Roman newborns were no doubt taken home by infertile couples. Some were picked up and raised as house or field slaves. Some of these children were rescued to play with the couple’s natural children, or as court-jesters, or for pedophilic gratification and some were genuinely loved and educated by their masters.

In the Catacomb of Praetextatus there is a grave with the name “Stercorius” on it. Some are kind and translate the Latin name “abandoned in the garbage.” But the true translation of the name of this abandoned child, undoubtedly raised as a slave, is “little shit.” The catacomb names of Projectus and Projecticus in the catacomb of St. Callixtus convey that these children were abandoned on the dung hills and garbage heaps of Rome.

The catacombs are filled with very tiny graves with the epitaph “adopted daughter of…” or “adopted son of…” inscribed on them. These inscriptions refer to the many babies and young children Christians rescued from the trash over the centuries. Tertullian says Christians sought out the tiny bodies of newborn babies from the refuse and dung heaps and raised them as their own or tended to them before they died or gave them a decent burial. 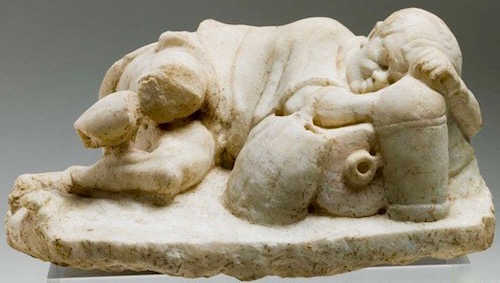 The Christian idea that each individual person has worth because they were created by God was foreign to the lies of pagan society where the State, the tribe, the collective was the only value they knew. There are numerous tombs of small dimensions in the catacombs. Out of a total of 111 burials in one gallery of the Catacomb of Panfilo, 83 are of children and only 5 have inscriptions.

But to all the exposti, the dead, the murdered, the abandoned, the anonymous little ones:

“Jesus said, ‘Let the little children come to me, and do not hinder them, for the kingdom of heaven belongs to such as these.’” Matthew 19:14—Sandra Sweeny Silver