Shoes have meanings other than just something one wears to protect the feet against the hurtful perils of the outside world. The Nike Tanjun means in our modern American world: I am athletic, toned, outdoorsy, hip and fit. It is a fashion statement meant to convey: “This is who I am.”

Many in the Western world have adopted the ancient/modern Asian practice of taking off shoes and leaving them (and outside contaminations) at the front/back door. 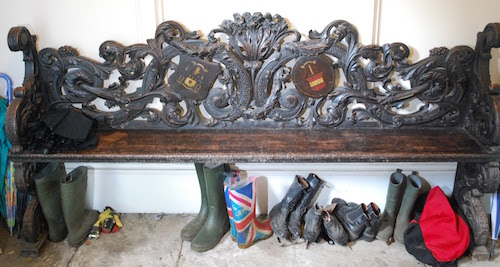 Of course, unlike the Western world, some Asians still eat on low-lying tables and sleep on the floor, so it was a “practical” custom for them, as well a statement about who they are/were.

The Western world was shocked when an Iraqi journalist, Muntazer al-Zaidi, threw his shoes at President George Bush while he was having a press conference in Iraq on December 14, 2008.

George Bush was ironic and unflappable: “That’s what people do in a free society.” In Arab society it is a an insult to even show the sole of your shoe to someone. To hit someone with a shoe means the person is regarded as the lowest of the low. After the first Gulf War, George’s father, George Senior, had a mosaic of him made on the floor of the al-Rashid Hotel in Baghdad so that anyone entering the Hotel had to walk with their shoes over his face.

But “throwing one’s shoe at someone” goes way back to the time of King David. In Psalm 60:8 David the Warrior has assurance from God that he will triumph over his enemies: “Moab is My washbowl; Over Edom I shall throw My shoe; Shout loud, O Philistia, because of Me!” So in that part of the Middle East, the thrown shoe has been a symbol of degradation and repudiation for over 3,000 years.

The Jews had a custom: if a man marries a wife and he dies without having children, it is the obligation of another brother of the dead man to marry and have children with the wife so his brother’s legacy survives. This is called Levirate Marriage—practiced in many clan-like societies where marriage is forbidden outside the tribe— as it was in ancient Jewish tribes. The Levirate Law is in Deuteronomy 25:7-10:

“However, if a man does not want to marry his (dead) brother’s wife, she shall go to the elders at the town gate and say, ‘My husband’s brother refuses to carry on his brother’s name in Israel. He will not fulfill the duty of a brother-in-law to me.’  Then the elders of his town shall summon him and talk to him. If he persists in saying, ‘I do not want to marry her,’ his brother’s widow shall go up to him in the presence of the elders, take off one of his sandals, spit in his face and say, ‘This is what is done to the man who will not build up his brother’s family line.’ That man’s line shall be known in Israel as The Family of the Unsandaled.” (c. 1400 BC)

Obviously, even c. 400 years before David’s time, it was a mark of shame to be “unsaddled.” It indicates that shoes/sandals were obligatory wear in that time and to be “unsandaled” was a mark of shame as well as poverty, low-class. There is no word for shoes in the Old Testament, but there is a word for going without shoes, being barefoot—Yahef, “to be without shoes.” 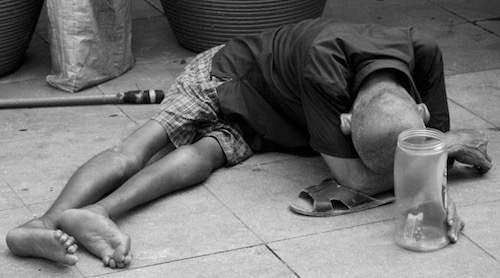 The ultimate root of Yahef lies in the primary roots notion “of peeling, removing the bark of shell,” exposing it naked and hence shameful. In the ancient and modern Middle East shoes have always been symbols of something other than what we in the West denote as shoes, “covering for foot.”

One remembers the seminal experience (theophany) of Moses in Deuteronomy 3:1-5:

“Now Moses was tending the flock of Jethro his father-in-law, the priest of Midian, and he led the flock to the far side of the wilderness and came to Horeb (in Saudi Arabia?), the mountain of God. There the angel of the Lord appeared to him in flames of fire from within a bush. Moses saw that though the bush was on fire it did not burn up. So Moses thought, ‘I will go over and see this strange sight—why the bush does not burn up.’ When the Lord saw that he had gone over to look, God called to him from within the bush, ‘Moses! Moses!” And Moses said, ‘Here I am.’ ‘Do not come any closer,’ God said. ‘Take off your sandals, for the place where you are standing is holy ground.’

In these verses the holiness of God is channeled through “Take off your sandals, for the place where you are standing is holy ground.” One could not approach the fire of God shod with sandals and all the contamination their soles represent. One had to be “naked,” so to speak, before God. Man is always naked before God no matter what he is wearing or what sandals/shoes cover his feet.

Joshua was confronted by an archangel: “The captain of the LORD’S host said to Joshua, ‘Remove your sandals from your feet, for the place where you are standing is holy.’ And Joshua did so.” (Joshua 5:15) Again sandals are symbolized as contaminated things. 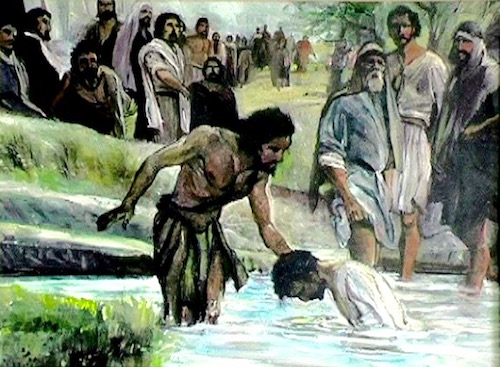 “The people were waiting expectantly and were all wondering in their hearts if John might possibly be the Messiah. John answered them all, ‘I baptize you with water. But one who is more powerful than I will come, the straps of whose sandals I am not worthy to untie. He will baptize you with the Holy Spirit and fire. His winnowing fork is in his hand to clear his threshing floor and to gather the wheat into his barn, but he will burn up the chaff with unquenchable fire.’ And with many other words John exhorted the people and proclaimed the good news to them.” Luke 3:15-18

The Baptist in comparing himself to Jesus before the crowd of people said: I am not worthy compared to the Messiah who is more powerful than I. In fact, I’m not even worthy to untie His sandals, to even be the slave who unties His sandals. I just baptize you with water but He will baptize you with the Holly Spirit and with fire.

Sandals in this passage are representative of filth/contamination and John says about his own ministry, as the Forerunner of Jesus/the-long-ago-predicted-Messiah, I am lower than a common house slave compared to Jesus.

Paul writing to the people in the church in Ephesus in c.60-62 AD some 30 years after Jesus’ resurrection uses a powerful metaphor of how we as Christians should “dress’” ourselves every day when we walk out for Christian service in this world. His view of sandals/shoes is a positive one. 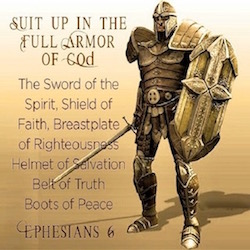 Stand therefore, having your loins girt about with truth, and having on the breastplate of righteousness; And your feet shod with the preparation of the gospel of peace; Above all, taking the shield of faith, wherewith ye shall be able to quench all the fiery darts of the wicked. And take the helmet of salvation, and the sword of the Spirit, which is the word of God. Praying always with all prayer and supplication in the Spirit, and watching thereunto with all perseverance and supplication for all saints.” Ephesians 6:11-18

Our feet, guided by our will, take us daily to known and unknown places. Hopefully in a hurry to where your “peaceful” feet will take you in His Name? 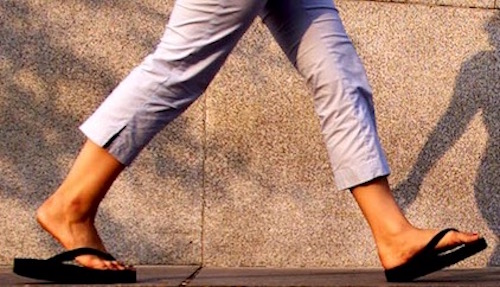 He may take you near and far through many trials but you are shod with His Gospel of Peace wherever you go. Take heart.—Sandra Sweeny Silver 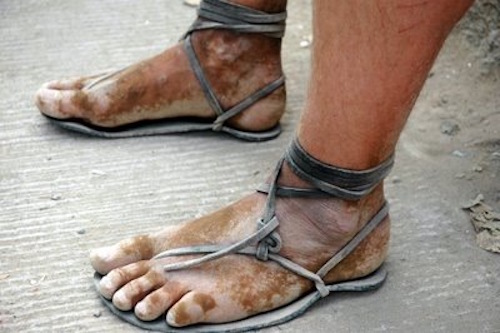