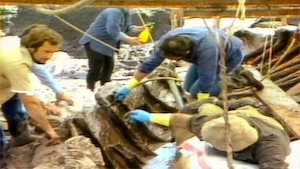 “The Jesus Boat,” so called by archaeologists, was found in 1986 on the northwestern shore of the Sea of Galilee by two fishermen, the brothers Moshe and Yuval Lufan. A drought had reduced the level of the Sea and exposed some nails. The brothers examined the site and immediately contacted authorities.

The Lufan brothers had hoped they would one day discover something wonderful on the Galilee that would enrich their past. Little did they know. The Israel Antiquities Authority and others examined the site. Because of the danger of looters and the rising waters of the Galilee, the team worked day and night for 12 days to rescue the old structure from its mud encasement. 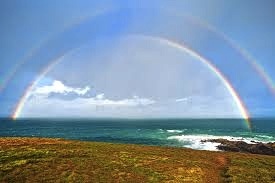 When they had uncovered enough to know it was a boat, there was a short torrential downpour followed by a rare and double rainbow appearing overhead. Many at the sight believed this to be a sign from God. Once the boat was recovered, it was submerged in a chemical bath for 7 years to preserve it before it could be displayed. The Jesus Boat is a 1st century fishing boat of the size and construction used by fisherman like Peter and John who made their living catching fish on the lake: “As Jesus was walking beside the Sea of Galilee, he saw two brothers, Simon called Peter and his brother Andrew. They were casting a net into the lake, for they were fishermen.’Come, follow me,’ Jesus said, ‘and I will send you out to fish for people.‘ At once they left their nets and followed him. Going on from there, he saw two other brothers, James son of Zebedee and his brother John. They were in a boat with their father Zebedee, preparing their nets. Jesus called them, and immediately they left the boat and their father and followed him. “Matthew 4:18-22

Made of scraps of many different types of wood including cedar and oak, the Jesus Boat measures 27’ long, 7.5’ wide and 4.5’ deep. The planks are joined together by pegged mortise and tenon joints and nails. It has a flat bottom, room for four staggered rowers and a mast for sailing. Indicating that fisherman of the time ate and were out late, inside the boat was found a large broken pot and a small Jewish oil lamp reflecting the style of pottery and lamps used in Jesus’ time.

The Boat could carry a crew and ten passengers if used as a ferry boat or if used as a fishing boat, could hold about five crew members and a catch of 600 pounds up to a ton of fish. Carbon-14 dating on a piece of the wood from the Galilee boat gives c. 40 AD as its date, plus or minus 80 years.

Boats like the Jesus Boat are mentioned 50 times in the Gospels. Interestingly, the Jesus Boat was found in the general area of Gennesaret where Jesus and His disciples landed after Jesus was seen walking on the waters of the Sea of Galilee.

“Immediately Jesus made his disciples get into the boat and go on ahead of him to Bethsaida, while he dismissed the crowd (after the miracle of the Loaves and Fishes). After leaving them, he went up on a mountainside to pray. Later that night, the boat was in the middle of the lake, and he was alone on land. He saw the disciples straining at the oars, because the wind was against them. Shortly before dawn he went out to them, walking on the lake. He was about to pass by them, but when they saw him walking on the lake, they thought he was a ghost. They cried out, because they all saw him and were terrified. Immediately he spoke to them and said, ‘Take courage! It is I. Don’t be afraid.’ Then he climbed into the boat with them, and the wind died down. They were completely amazed….When they had crossed over, they landed at Gennesaret and anchored there.” Mark 6:45-53—Article by Sandra Sweeny Silver

Play the video above to see a 42 second Computer Animation of the Construction of the Jesus Boat. The mosaic of the boat (at the end of the video) is from the first century AD.