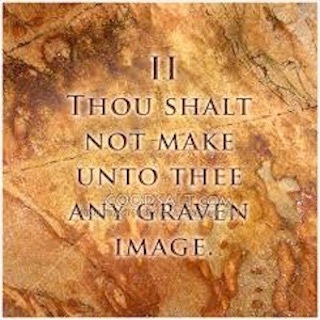 The Crucifixion, the Resurrection and the trial before Pontius Pilate are never represented in catacomb art. The early Christians were tied to Jewish traditions and Old Testament commandments that forbade any depictions pictorially or materially that could possibly become iconic:

“You shall not make for yourself an image in the form of anything in heaven above or on the earth beneath or in the waters below. You shall not bow down to them or worship them; for I, the Lord your God, am a jealous God.” Exodus 20: 4.5

In the Jewish Catacombs in Rome there are paintings of the shofar and the menorah, but none of deity. Jews had then and some still have a taboo against pronouncing even the tetragrammaton, the four syllable name of God.

The four Hebrew letters YHWH signifying “Yahweh” (meaning “I AM”) were considered too holy to be spoken. If uttering God’s name was forbidden, it was double anathema to attempt to portray His image.

As the Jewish influence began to wane in the 3rd century, however, paintings of a Romanized Christ began to appear in catacomb art: seated at a Communion table with His disciples; talking to the woman at the well; looking back at the woman who touched the hem of His garment and was healed of a bleeding issue.

Eusebius, the early church historian, claims to have seen in c. 300 an old bronze statue of Jesus related to the miracle of the woman healed of a bleeding issue:

“Since I have mentioned this city (Caesarea Philippi), I should not omit a story that should be recorded also for those who follow us. The woman with a bleeding hemorrhage who was cured by our Savior, as we learn from the holy Gospels (Mark 5:25-34), came from here, they claim. Her house was pointed out in the city and amazing memorials of the Savior’s benefit to her were still there. On a high stone base at the gates of her home stood a bronze statue of a woman on bent knee stretching out her hands like a suppliant. Opposite to this was another statue of the same material—a standing figure of a man clothed in a handsome double cloak and reaching his hand out to the woman. Near his feet on the monument grew an exotic herb that climbed up to the hem of the bronze double cloak and served as an antidote for diseases of every kind. This statue, they said, resembled the features of Jesus and was still extant in my own time. I saw it with my own eyes when I stayed in the city. It is not surprising that those Gentiles who long ago were benefited by our Savior should have made these things, since I have examined likenesses of his apostles also—Peter and Paul—and in fact of Christ Himself preserved in color portrait paintings. And this is to be expected since ancient Gentiles customarily honored them as Saviors in this unreserved fashion.” Eusebius, Church History 7.18

In this passage we learn for the first time that the Biblical woman “subject to bleeding for twelve years” was a Gentile who lived in Caesarea Philippi within the Golan Heights. To honor her healing, she had commissioned two statues, one of her and one of Jesus, to be placed at the gates of her home. Eusebius did not believe in fashioning religious images and gently chides the woman’s “ancient Gentile” propensity to create images “in this unreserved fashion” that could become idols or, as he says, “Saviors.”

This same Eusebius was upset with a letter he had received from Constantia, Constantine the Great’s sister, asking to see portraits of Jesus and the Apostles still extant in their day (c. 325). In a fragment of his letter that still survives, he replies:

“Such practices (of painting portraits of Jesus or other holy people) are illegal for us….Are not   such things (paintings and icons) excluded and banished from churches all over the world. (The icons should be destroyed) lest we appear, like the idol worshippers, to carry our God around in an image.” Letter to Constantia

The orthodox Church in the 4th century clearly held to the views of the Jews and of the Old Testament’s 2nd commandment.

The most represented image in catacomb art is of Christ as the Good Shepherd. In the ancient world sheep provided wool, milk, cheese and meat and the shepherd of the sheep was the person who led the sheep to good pastures, risked his life to protect them from wild animals, gave help to the sheep who were injured, kept an accurate account of them, looked for those who were lost and made sure they were safe at night. Hammurabi of Babylon (c. 1750 BC) and other rulers throughout Mesopotamia were all called “shepherds.”

The kings of Israel were expected by God to be shepherds of His people (II Samuel 5:2) and the New Testament word for “pastor” from the Latin pastorem literally means          “shepherd.” For thousands of years and even in our modern times idols were and are worshipped.

[CLICK HERE for article on Ancient and Modern Idols]

“Idol” comes from the Greek word eidolon meaning “appearance, reflection in water or a mirror.” That Greek word was appropriated by the New Testament writers (e.g. I Corinthians 8:4) as an accurate description of the narcissistic nature of the images worshipped by pagans. The man-made images were, as the word implies, simply a reflection of the man who made them. When man looked at his idols, he was looking at himself, not at God.

Those who believed that “God is Spirit” (John 4:24) and that it is not possible and even sacrilegious to worship the immaterial through the material were called “Iconoclasts,” “image-breakers.” They vehemently objected, as did the Early Church, to religious portrayals and icons and often physically smashed them to pieces to the horror and wrath of those who believed that illiterate people needed tangible objects of worship and veneration and that God Himself became tangible in Jesus. Those who defended icons were called “Iconophiles,” “image lovers.”

Most of the Good Shepherd images in catacomb paintings and in sculptures portray a young Roman shepherd with a sheep flung over his shoulders. Narcissus, in Greek mythology a hunter renowned for his beauty, falls in love with his own reflection in the water.

“Suppose one of you has a hundred sheep and loses one of them. Does he not leave the ninety-nine in the open country and go after the lost sheep until he finds it? And when he finds it, he joyfully puts it on his shoulders and goes home. Then he calls his friends and neighbors together and says, ‘Rejoice with me; I have found my lost sheep.’ I tell you that in the same way there will be more rejoicing in heaven over one sinner who repents than over ninety-nine righteous persons who do not need to repent.” Luke 15:4-7

“The Lord is my shepherd, I shall not be in want. He makes me to lie down in green pastures. He leads me beside quiet water. He restores my soul.” Psalm 23:1,2

“When the Son of Man comes in his glory…he will sit on his glorious throne. All the nations will be gathered before him and he will separate the people one from another as a shepherd separates the sheep from the goats. He will put the sheep on his right and the goats on his left.” Matthew 25:31-33

How the catacomb Christians rejoiced! They, the goats, the Gentiles who had been shut out of the heavenly kingdom and lost in paganism, had been found and rescued by Jesus, the Good Shepherd. The early Christians artistically used the Biblical metaphor of the Good Shepherd to evince the redeeming work of Christ and of His care for believers—Jew AND Gentile. There is no attempt to depict Jesus as the man He was in catacomb art. An idyllic young Roman shepherd could not become an icon, they reasoned.—Sandra Sweeny Silver