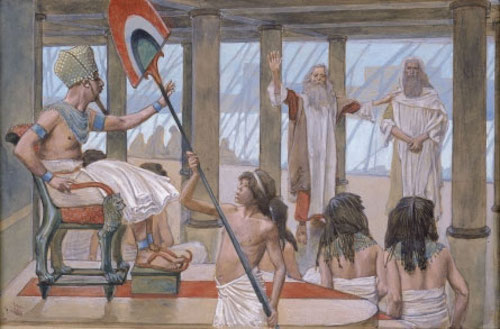 “Afterward Moses and Aaron went to Pharaoh and said, ‘This is what the Lord, the God of Israel, says: Let my people go, so that they may hold a festival to me in the wilderness.’ Pharaoh said, ‘Who is the Lord, that I should obey him and let Israel go? I do not know the Lord and I will not let Israel go’….That same day Pharaoh gave this order to the slave drivers and overseers in charge of the people: “You are no longer to supply the people with straw for making bricks; let them go and gather their own straw. But require them to make the same number of bricks as before; don’t reduce the quota. They are lazy; that is why they are crying out, Let us go and sacrifice to our God. Make the work harder for the people so that they keep working and pay no attention to lies.’ Then the slave drivers and the overseers went out and said to the people, ‘This is what Pharaoh says: I will not give you any more straw. Go and get your own straw wherever you can find it, but your work will not be reduced at all.’ So the people scattered all over Egypt to gather stubble to use for straw. The slave drivers kept pressing them, saying, ‘Complete the work required of you for each day, just as when you had straw.’ And Pharaoh’s slave drivers beat the Israelite overseers they had appointed, demanding, ‘Why haven’t you met your quota of bricks yesterday or today, as before?’” Exodus 5:1,2; 6-14

The hieroglyphs on this wall painting read: “captives whom his majesty brought for the works of the temple of Amon” and “the taskmaster says to the builders: ‘The rod is in my hand; be not idle.’” Other Egyptian texts mention brick quotas and a lack of straw, just as Exodus 5 does.

The Hebrews had been in slavery in Egypt for four hundred years. God sent them a man, Moses, who would lead them out of slavery and into The Promised Land. But Pharaoh was stubborn and would not let his free labor force go.

So God had sent Nine Plagues upon Egypt. At the end of the Tenth plague, the death of all the first-born, the Jews were forced out of Egypt: “So Moses said, ‘This is what the Lord says: About midnight I will go throughout Egypt. Every firstborn son in Egypt will die, from the firstborn son of Pharaoh, who sits on the throne, to the firstborn son of the female slave, who is at her hand mill, and all the firstborn of the cattle as well. There will be loud wailing throughout Egypt—worse than there has ever been or ever will be again. But among the Israelites not a dog will bark at any person or animal. Then Pharaoh, you will know that the Lord makes a distinction between Egypt and Israel. All these officials of yours will come to me, bowing down before me and saying, Go, you and all the people who follow you! After that I will leave.’ Then Moses, hot with anger, left Pharaoh.” Exodus 11:4-8

The historicity of the Exodus from Egypt is a seminal belief among Jews, Muslims and Christians. There is disagreement among some about the date of the Exodus (1400’s or 1200’s), but none doubt the Exodus as an historical fact.

A papyrus (below) was discovered in Egypt in the early 1800’s called the Ipuwer Papyrus. It is in the Dutch National Museum of Antiquities in Leiden, Netherlands.

The dating of the Papyrus is difficult. Some date it to the 1900’s BC, others to the 1500’s BC. Others say it is a copy or a copy of a copy made centuries earlier and still others claim it was written by a man who was an eye-witness to this destruction of Egypt.

This writer has no idea when the Admonitions of Ipuwer, as it is called, was written. But it is worthy of remarking that this ancient Ipuwer Papyrus contains many of the plagues on Egypt which led to the Exodus described in the Bible. For example:

IPUWER 2:5-6 Plague is throughout the land. Blood is everywhere.
2:10 The river is blood.
2:10 Men shrink from tasting – human beings, and thirst after water
3:10-13 That is our water! That is our happiness! What shall we do in respect thereof? All is ruin.

EXODUS 7:20 …all the waters of the river were turned to blood.
7:21 …there was blood throughout all the land of Egypt …and the river stank.
7:24 And all the Egyptians dug around the river for water to drink; for they could not drink of the water of the river. 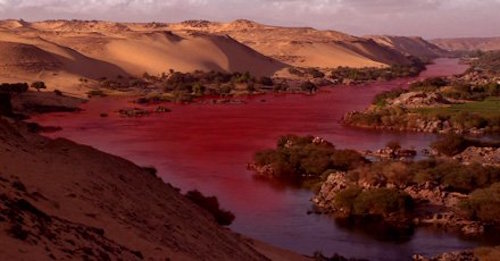 IPUWER 2:10 Forsooth, gates, columns and walls are consumed by fire.
10:3-6 Lower Egypt weeps… The entire palace is without its revenues. To it belong [by right] wheat and barley, geese and fish
6:3 Forsooth, grain has perished on every side.
5:12 Forsooth, that has perished which was yesterday seen. The land is left over to its weariness like the cutting of flax.

EXODUS 9:23-24 …and the fire ran along the ground… there was hail, and fire mingled with the hail, very grievous.
9:25 …and the hail smote every herb of the field, and broke every tree of the field.
9:31-32 …and the flax and the barley was smitten; for the barley was in season, and flax was ripe. But the wheat and the rye were not smitten; for they were not grown up.
10:15 …there remained no green things in the trees, or in the herbs of the fields, through all the land of Egypt.

IPUWER 5:5 All animals, their hearts weep. Cattle moan…
9:2-3 Behold, cattle are left to stray, and there is none to gather them together. 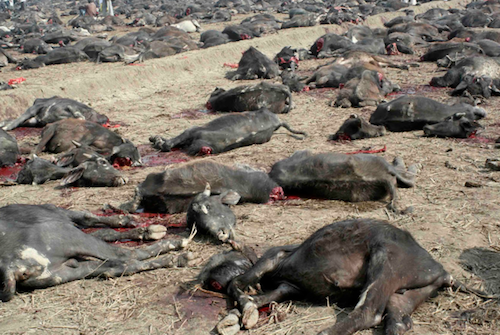 IPUWER 9:11 The land is without light.

EXODUS 10:22,23 And Moses stretched forth his hand toward heaven; and there was a thick darkness in all the land of Egypt three days: They saw not one another, neither rose any from his place for three days: but all the children of Israel had light in their dwellings.

IPUWER 7:1 Behold, the fire has mounted up on high. Its burning goes forth against the enemies of the land.

IPUWER 3:2 Gold and lapis lazuli, silver and malachite, carnelian and bronze… are fastened on the neck of female slaves.

EXODUS 12:35-36 …and they requested from the Egyptians, silver and gold articles and clothing. And God made the Egyptians favor them and they granted their request. [The Israelites] thus drained Egypt of its wealth.

There are many more references to the 10 plagues that “plagued” Egypt prior to the Exodus. The reader can wonder/decide for him/her self whether the Ipuwer Papyrus and the book of Exodus in the Bible describe the same events by accessing the Ipuwer Papyrus HERE.—Sandra Sweeny Silver