The Deadly Banners of Carrhae

Like other Romans of his time, the renowned General Marcus Licinius Crassus had never heard of silk. His sole concern one summer days in the year 53 B.C. was to destroy his foe, the barbarian Parthians (Persians). He had marched from Syria across the Euphrates river and had driven the enemy deep into the billowing sand dunes of what is now Iran. Near the city of Carrhae, his seven legions of men-at-arms and horsemen – some 40,000 in all – had just caught up with the Parthians. As the sun rose they were buckling into their armor. 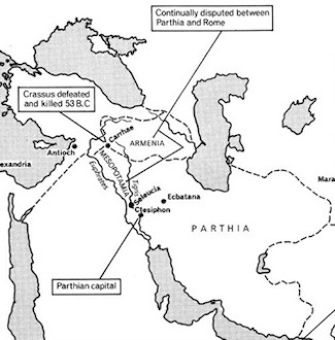 This very morning, he had absent-mindedly donned a plain black garment instead of the proud scarlet of a Roman general. He had corrected his error hastily only after someone pointed it out. None of the signs, however, gave warning of the decisive role that silk was to play in his career.

In spite of the portents, Crassus was supremely confident. He had commanded many a winning army in his day and these barbarians had shown no sign of fight. True, they had stopped retreating at last, but this was all to the good. Crassus welcomed the chance to do battle, after which he could go home.

He ranged his troops in a classic Roman battle style called the “testudo” formation: hollow squares with twelve men on each side standing so close together that their shields overlapped like fish scales. Protecting each hollow square of foot soldiers was a prancing squadron of cavalry. Surely no enemy could breach these solid blocks of steel.

But it was the familiar story of an outmoded form of warfare suddenly facing a new, flexible style. The Parthians were mobile and tricky, and, in the manner of guerrillas, they refused to fight on the enemy’s terms.

They evidently understood psychological warfare, also. To the Romans they looked more like beasts than men. They wore their hair long and bunched over their foreheads. Shaggy animal skins hung over their shoulders. They began the attack with noise – wild inhuman cries and the thump of hide-covered drums hung with bronze bells and copper rings. The sound, so the historian Plutarch wrote a century and a half later, was a “low dismal tone, a mixture of a wild beast’s roar and a harsh thunder peal.”

The Romans stood momentarily terrified at the uproar. Then the Parthians threw off their skin cloaks to reveal thick dazzling steel helmets and breatplates. Even their horses were armor-clad. Suddently they swooped in, unleashing a torrent of long arrows from powerful bows – weapons that made Roman bows look like toys. The arrows literally nailed the hands of the Romans to their shields and their feet to the ground. sometimes two men were impaled with a single shot.

Again and again the Parthian swept near, kicking up clouds of dust, wheeling just beyond reach of Roman swords, and releasing a fresh volley of arrows as they galloped away. (So the phrase “Parthian shot” was added to our language, meaning any damaging last-minute blow by word or deed.)

The Roman general’s son, Publius, led a charge and died. The Parthians mounted his head on a spear and paraded it before the shattered legions. “This, O my countrymen, is my own peculiar loss!” Crassus cried, “but if anyone be concerned for my love of this best of sons, let him show it in revenge….”

For a time the Romans doggedly held their ground. Then just at noon when the sun was hightest, the Parthians staged their coup. As they charged the Romans with their drums sounding, they unfurled their banners. These were of a gleaming, shimmering material such as Roman had never seen before, brilliant in color, embroidered with gold. Shining like fire, the banners spelled power and invincibility. The Romans – exhausted and suffering from wounds and thirst, their “invincible” testudo shattered – broke ranks in terror before this awesome sight and fled.

Over the next two days the Parthians had little left to do but murder the wounded and mop up the stragglers. Some 20,000 Romans died and another 10,000 were taken prisoner. Crassus himself was lured into a trap and killed, and his head was sent home to the Parthian king.

It was one of the greatest defeats in Roman history. To the survivors, the side effects went unnoticed at the time: the glittering banners were the Roman’s introduction to silk. It was a rude beginning, but silk was soon to be the most coveted item in their world and the basis of one of the greatest trade routes in history.

This road was to stitch the known world together from Pacific to Atlantic, and to mirror that area’s history. Cities, empires, and civilizations rose to power and fell to waste along its way. A motley assortment of explorers, adventurers, merchants, warriors, and priests trudged its ruts. Ideas, philosophies, religions, and inventions flowed intermittently back and forth.

Even when wars raged around it and kingdoms toppled, the silk trade usually pressed on. It was more important empires. Silk was prized beyond belief, at times literally worth its weight in gold. It was a symbol of luxury, a treasure to be haggled for, fought for, died for.

Seventeen years later another small event was recorded, but its significance, too, went unnoticed by historians for centuries. In 36 B.C. a Chinese force attacked and captured a Central Asian town, Li-chien, some 3,700 miles east of Rome. It had been held by another band of barbarians, the Huns, but in the town the Chinese captured 145 foreign mercenary soldiers. There were three peculiar aspects to this town. The name, Li-chien, was one of the Chinese names later applied to the Roman Empire. It was protected by wooden stockades, a Roman technique. Its soldiers employed the testudo formation of overlapping shields.

Were those nameless soldiers of Li-chien a remnant of Crassus’ army? If so, the battle of Carrhae provided another link with the history of silk because these foreign mercenaries were almost certainly the first “westerners” to set foot on the mighty Silk Road.

In the time of Crassus, few Romans had more than a vague awareness of territory east of Persia. The Chinese, similarly, heard only the faintest rumors of a world west of Central Asia. The two great empires were little oases of civilization, separated by vast, uninhabited stretches and barbarian hordes.

Though he little knew or cared, the ill-fated Crassus in his last hours on earth had glimpsed one of the wonders of ages.