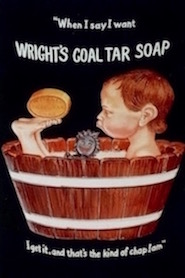 “Cleanliness is next to Godliness” is an expression used often by mothers wishing to soap up their children in the bathtub. As a child, I thought if there was a God, He would certainly not care if I was dirty as long as I loved Him. And that is true because the Bible is full of filthy beggars and lepers whom God loves/who are “next to God.”

Wright’s Coal Tar Soap was created by William Valentine Wright in 1860 as an antiseptic soap to thoroughly clean the body. The “coal tar” part comes from the fact that the soap actually comes from a dirty black hunk of coal distilled into a liquid which he used to make his cleansing bar.

But the idea that “being physically clean is a godly state” has persisted for thousands of years since the 2nd century AD Rabbi (or Tanna meaning “teachers”) Phinehas ben Yair/Jair first suggested the aphorism in his famous “ladder of holiness.” The ladder as understood in Babylonian tradition based on textual witnesses of Talmud Bavli, Avoda Zara 20b is as follows:

The aphorism “purity leads to holiness” can be translated from the Hebrew words into the English “cleanliness is next to godliness.”

Some say the “cleanliness/godliness” expression was first used publicly by the English preacher John Wesley who, even though he may not have known it, quoted the old Rabbi c. 1,600 years after his death in his sermon “On Dress:” Cleanliness is indeed next to Godliness.”

Let’s be clear here. There is no such “cleanliness” phrase in the Old or the New Testaments. It is a phrase pronounced in the Mishnah by a Jewish rabbi in a laudatory and poetic rift. But it has remained and been implied, probably, ever since Moses wrote the Pentateuch, the first five books of the Old Testament. Three of the five books, Leviticus, Numbers and Deuteronomy, are full of injunctions and laws relating to “washing in water,” “being clean,” and “cleansing.” But “cleanliness” (being physically “clean and neat”) has nothing on God’s earth to do with your relationship to God.

American missionaries, however, have carried their Bibles and rules of cleanliness with them into all parts of our world since 1700. They helped establish clean homes, schools and hospitals that were sanitary for the people to whom they were ministering. It was part and parcel of their ministry of salvation to help the people they found in squalor to be healthy and live decent lives.

Missionaries often get short shrift by some who accuse them of “destroying native cultures.” As they cared for the eternal salvation of the souls for whom they often gave their lives, they, also, cared for the minds (through education and schools) and the physical bodies (through hospitals and clean homes) of those converts by instituting sanitary conditions. In those missionaries and their love for the converts, “cleanliness was indeed connected to godliness.” 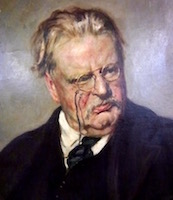 C.K. Chesterton (1874-1936) English writer, orator, literary and art critic, lay theologian said: “Cleanliness is not next to godliness nowadays, for cleanliness is made an essential and godliness is regarded as an offense.”—Article By Sandra Sweeny Silver