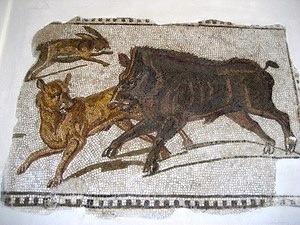 No one knows for sure exactly when the dog was domesticated or from what animal man’s best friend came. Most say the wolf was the precursor of the dog, but dogs were known for thousands of years in areas foreign to wolves. Ancient man must have watched in wonder as dog-like animals ran after and brought down animals many times their size and he must have thought, Get one of those animals and train him to take down the food we need. Dogs as hunters or helpers in the hunt were man’s first use of this canine. 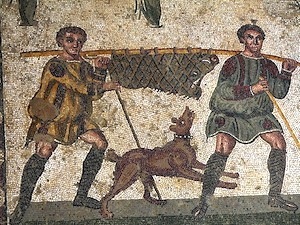 source of hunting  games and meat. Most heroes in Greek myths and legends kill a wild boar sometime in their lives: e.g. Hercules, Odysseus. The boar symbolized warrior virtues of fearless recklessness and to hunt and kill one was to be valiant and manly. Dogs were equally fearless and their barking, speed and fangs could corner a boar. The ancient Romans have left behind many more mosaic representations of hunting than did the Greeks.

The myth of Atalanta and the Calydonian Boar has nothing to do with dogs but has a lot to say about the hunting skills of women and the feelings in the ancient world toward women interfering in man’s domain:

“When Oineus (king of Kalydon) was offering his annual sacrifice of the first fruits of the land to all the gods, he overlooked Artemis. The wrathful goddess let loose a    great and   powerful wild boar, which made the earth unsowable and destroyed herds and people that encountered it. In order to get rid of this boar, Oineus called together 16 of the best men of Hellas, including a woman Atalanta, and proclaimed the skin as a trophy to the man who could slay it….two of the hunters from Arkadia and some of the others refused contemptuously to go out hunting with a woman, but Meleagros, though married to Idas’ and Marpessa’s daughter Kleopatra, still wanted to make a child with Atalanta, and so compelled the men to join the hunt with her. When they had encircled the boar, the animal killed Hyleus and Ankaios, and Peleus accidentally speared Eurytion (king of Phthia) with his javelin. Atalanta was first to hit the boar, in the back with an arrow. Amphiaraos then got it in the eye, and Meleagros killed it with a blow on the flank. When he received the skin, he gave it to Atalanta. But the sons of Thestios, who considered it disgraceful that a woman should get the trophy where men were involved, took the skin from her, saying that it was properly theirs by right of birth, if Meleagros chose not to accept it. Outraged by this, Meleagros slew the sons of Thestios and again gave the skin to Atalanta. But Althaia (another woman), in grief over the death of her brothers (the sons of Thestios), set fire to the brand that the Moirai declared when consumed would end the life of Meleagros, and Meleagros died on the spot.” Pseudo-Apollodorus (1st century AD), Bibliotheca 1. 66

So ended Meleagros’ lustful desires for Atalanta. But she had drawn the first blood. The Greek historian Xenophon (430-354 BC) wrote a treatise on hunting hounds. His favorite dog was named Horme meaning “eager,” a two syllable word because Xenophon believed all dogs should only have one or two syllable names.

Alexander the Great (356-323 BC) loved his dog named Peritas (three syllable name). He walked him from Greece to the Indus Valley and Peritas never failed him. According to Plutarch (45-120 AD) in his Parallel Lives: Life Of Alexander 6: “It is said when he lost a dog named Peritas, which had been reared by him and was loved by him, he founded a city and gave it the dog’s name.” The city was somewhere in India, perhaps not far from the town named after his dead horse Bucephalus. Both cities were the spoils of war for Alexander after he had defeated King Porus at the Battle of the Hydaspes in 326 BC and annexed King Porus’ Punjab area to his Greek Empire which by the time Alexander died at 33 (June 323 BC at Babylon) was an Empire that stretched across three continents and covered two million square miles. 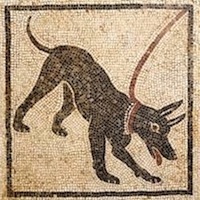 Some dogs 2,000 years ago had beautiful studded collars just like we sport on our sporty dogs. The red color of his studded collar and on this Tunisian dog’s leather leash was produced from “madder,” a European herb whose roots were used to produce red, russet, pink and brown clothing and leathers. Tunisia had become a Roman province in 146 BC after the 3rd Punic War and the final defeat of African Carthage. The Romans called Tunisia the “Province of Africa,” named, perhaps, after the North African Berbers who were called “Afri.” 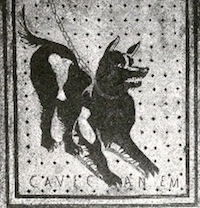 We still post “Beware Of Dog” signs on our homes if we have unpredictable dogs.  This mosaic of their Fido (Xenophon would approve–two syllables only) in the city of Pompeii at the House of the Tragic Poet has the words directly under their dog. Perhaps it was a slab outside the house. Were I alive before Pompeii was buried in ash in 79 AD, I would have not entered that house as long as that spotted dog was there–even though I LOVE poetry, I would fear a tragic, unpoetic, end! Look at him! “Cave Canem,” indeed. 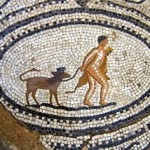 If you had a dog 2,000 years ago and if you were a Roman, Tunisian or Christian, you would have to walk your dog so he/she could do their “business” (strange word to describe micturating and egesting). 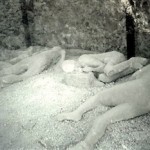 And if you had a dog on that Pompeian August morning in 79 AD and if you hadn’t heeded the constant belchings that Mt. Vesuvius had been making for weeks and you were still there when the old man blew his stack and sent lava racing 18 miles per hour down the lush slopes, you would be 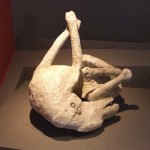 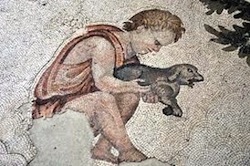 not hunters or “useful” in any way is because our children love and need them and we adults come  to love them and appreciate them for their indulgence of and attachment to us even if we are occasionally unkind or neglectful of them. They are the perfect personification of agape love, of unconditional love, like God loves us.—Sandra Sweeny Silver