The Jewish historian Flavius Josephus was present during the Battle for Jerusalem in 70 AD when the Roman army first entered Jerusalem to do battle with the Jews. He describes their intimidating entrance:

“…the auxiliaries…marched first….after whom followed those that were to prepare the roads and measure out the camp; then came the commander’s baggage and after that the other soldiers (Barbarians)…then came Titus himself having with him another select body;

…and then came the pikemen carrying 20’-30’ pointed wooden poles;

…after whom came the horses belonging to that Legion. All these came before the engines of war;

…and after these engines followed the tribunes and the leaders of the cohorts with their select bodies; after these came the ensigns with the eagle; and before those ensigns came the trumpeters belonging to them; next to these came the main body of the army in their ranks, every rank being six deep;

…the servants belonging to every Legion came after these; and before these last their baggage; the mercenaries came last and those that guarded them brought up the rear.” Josephus, Wars 5.2.1

The Jewish historian Josephus was the interpreter for the Romans. He talked with the Jews in their own language and relayed the Roman Latin negotiations to the Aramaic-speaking Jews. He is the only historian who saw and described the Roman army entry into a potential battlefield with such minute accuracy. The Battle for Jerusalem lasted from the Roman’s entry into Jerusalem in February 70 to the final hard-fought victory over the Jews in September 70.

The Jews fought valiantly and often bested the Romans. But Rome won. Thus came to an end an ancient city:

“…Caesar gave orders that (the army) should now demolish the entire city and Temple….(Jerusalem) was so thoroughly laid even with the ground by those that dug it up to the foundation, that there was left nothing to make those that came there believe (the city) had ever been inhabited….Nor had anyone who had known the place before, had come on a sudden to it now, would he have known it again.” Josephus, Wars of the Jews 7.1.1 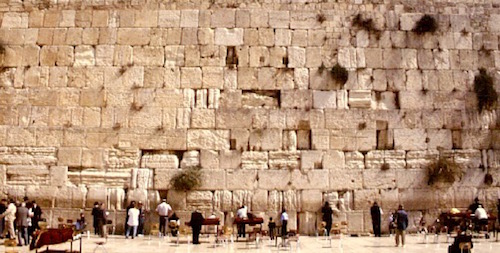