Since the beginning of man, people have always wanted to communicate. And they wanted to communicate important things in their lives. The prehistoric cave drawings in Altimira in Spain and Lascaux in France cry out the lives and the being of those extremely remote people. The hands on the walls say, “I did this drawing. I was here. I existed. And I managed to survive by my wit, my mind, by hunting and killing animals many times my size. And this is how I did   it. And I express how I did it through communicating the important things in my life with my hands.”

Thousands of years after prehistoric cave men, people were still communicating through their hands the important events in their lives through letters written on papyrus rather than through drawings on cave walls. By the Greco-Roman times, there was a formula for letter writing taught in all Greek and Roman schools.  It began with an introduction of the writer and the identity of the recipient. There was a short greeting and often a thanksgiving for health or safety. The author then presented the main body of the letter and would conclude with wishes for good health and a farewell. Here’s a potpourri of letters written by people in the first to third centuries of the Christian faith:

CLICK HERE for article on infanticide in the ancient world

Hilarion was the husband of pregnant Alis and had apparently gone to Alexandria where there was work and he would be able to send some money home. Obviously the child he mentions was a boy of theirs. He tells her to kill or abandon on the garbage a girl if she has one, but to keep the male child. Abortion and newborn abandonment were common in the ancient pagan world. Alis worried that Hilarion would “forget her” in Alexandria and he reassures her he won’t.

The god Serapis was created by Ptolemy I, a Greek ruler of Egypt, in the 3rd century BC in order to unite both the Egyptians and the Greeks. Serapis had a human head rather than the typical Egyptian animal head because Greeks always gave their gods human forms. The mother is named Serapis like the god and invokes that god to keep her children healthy. She is a loving mother who is beside herself with joy when a letter arrives from her children, as was their nurse and their tutor.

This rather unloving and chiding letter from older sisters to their two younger sisters is a universal one of older siblings lording it over the younger ones: light the lamp in the shrine to the gods; shake the dust off all the cushions; keep studying; don’t worry about Mother; don’t play in the courtyard where people will see your offensive behavior; behave yourselves when you are outside the house; take care of Titoas and Spharus (maybe dogs?). And not even a Farewell!

Letter from a sister to a brother: Egyptian,  2nd century AD 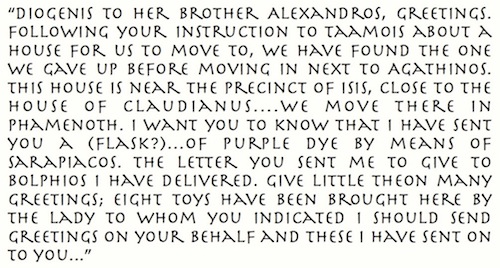 Diogenis’ brother Aurelius had instructed (his friend?) Taamois to find a house for his sister and family. They had apparently settled on a house at one time but instead they had moved next to Agathinos. Now they have bought the original house that is near the precinct of Isis (a goddess and her temple) and close to Claudianus’ home. They will move into the house in the winter month of Phamenoth. Diogenis wants her brother to know that Serapiacos should have delivered the purple dye she sent him. And she delivered to Bolphios  the letter he sent her to give to him. “Little Theon” is probably her brother’s child, Diogenis’ nephew, and she is pleased to say the eight toys for Theon have arrived at their home and she is sending them to him with this letter. This is a real estate and “things” (purple dye, toys) letter from a sister to her brother who are both well-off enough to buy houses and things.

Letter home to his father Epimachos from a young recruit named Apion from Egypt who had enlisted in the Roman Army in the 2nd century AD. 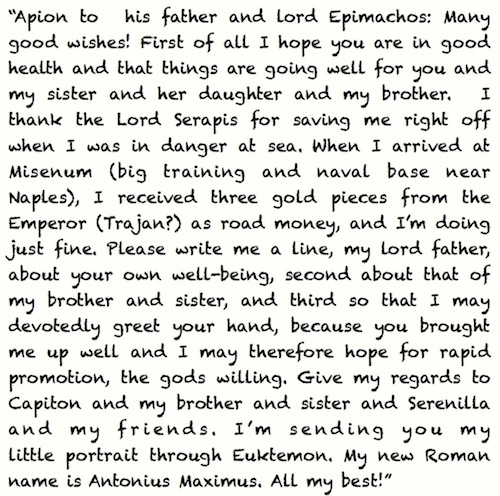 Because the letter has no mention of his mother, she was probably dead. Apion enlisted in the Roman army at Alexandria, got on a big Roman government ship filled with Egyptian recruits and sailed to Italy. The ship made it through a terrible storm and arrived at Misenum where he was to be trained. Apion received three gold pieces to tide him over and to get to his base once he was trained. He thanks his father for bringing him up well and giving him the education that will enable him to move up the  military ranks. There were obviously portrait-painters employed by the Roman army who would for a fee paint a papyrus picture of the new recruit to send back home to his family. His friend Euktemon is going to deliver the letter to Apion’s family and give them the portrait of their Roman army son. And he proudly tells his father his new Roman name that would replace his Greek name, as was the custom in the Roman army. But you rarely hear the words, “I love you,” in ancient Greco-Roman writings or, for that matter, in some cultures on our planet today.—Sandra Sweeny Silver

Kang Seung Yoon is a South Korean born in 1994 and leader of a boy-band named Winner who recently debuted and became a “monster rookie” band in Asia. Like most in his culture, Yoon was not used to saying, “I love you.” Here’s his three minute YouTube video—I’ll Write You A Letter.