Was the Gospel of Matthew written by Levi aka Matthew in Hebrew, Aramaic or Greek? There is a lot of controversy in recent centuries about that subject. This writer will explore what the ancient writers who were closer in time to Matthew had to say about the language in which Matthew was originally written:

“Matthew also issued a written gospel among the Hebrews in their own dialect.” Irenaeus, Against Heresies 3:1 c.175-185 A.D.

“The first (Gospel) is written according to Matthew, the same that was once a tax collector, but afterwards an emissary of Yeshua the Messiah, who having published it for the Jewish believers, wrote it in Hebrew.” Origen circa 210 CE, quoted by Eusebius, Eccl. Hist. 6:25 (300’s AD)

“Matthew, who is also Levi, and who from a publican came to be an apostle, first of all composed a Gospel of Christ in Judaea in the Hebrew language and characters for the benefit of those of the circumcision who had believed.

Who translated it after that in Greek is not sufficiently ascertained. Moreover, the Hebrew itself is preserved to this day in the library at Caesarea, which the martyr Pamphilus so diligently collected. I also was allowed by the Nazarenes who use this volume in the Syrian city of Beroea to copy it.” Jerome: De viris inlustribus (On Illustrious Men), chapter III.

“He being a Hebrew wrote in Hebrew, that is, his own tongue and most fluently; while things which were eloquently written in Hebrew were more eloquently turned into Greek.” Jerome, 382 AD On Illustrious Men, Book V

This writer will go with the early church writers who were within a few hundred years from Matthew and the other people who knew Jesus rather than with unproven theories several thousands of years away from sources.

Matthew (Levi) who wrote the first of the Gospels did write it in the Hebrew tongue which at that time was Aramaic. There were, however, at the time of Christ and the Apostles two languages spoken by Jews—Aramaic and Greek. So it is more than probable that Matthew or someone else translated Matthew’s biography of Christ into Greek in order to spread the Good News beyond the Jews.

Because Matthew’s original purpose was to prove to his Jewish brethren that Jesus is their Mashiach/Messiah, he included in his Gospel nine proof texts from the Old Testament which Jesus fulfilled—Matthew 1:22,23; 2:15; 2:17,18; 2:23; 4:14-16; 8:17; 12:17-21; 13:35; 27:9,10. Matthew was saying, Jesus IS the fulfillment of Old Testament predictions of our coming Messiah, “Anontied One.” He is called the Son of David nine times in the Gospel of Matthew. Matthew’s Gospel has more quotations from and allusions to the Old Testament than any other New Testament author.

We first meet Levi (aka Matthew) in Capernaum beside the Sea of Galilee:

“Once again Jesus went out beside the lake. A large crowd came to him, and he began to teach them.

CLICK HERE for “Jesus and the Constant Crowds” article

As he walked along, he saw Levi son of Alphaeus sitting at the tax collector’s booth.

On hearing this, Jesus said to them, ’It is not the healthy who need a doctor, but the sick. I have not come to call the righteous, but sinners.’” Mark 2:13-17

There were what the Jews called publicans aka tax collectors like Matthew who collected taxes for customs or tolls on imports, exports, and merchants who came to buy or sell in Israel. Matthew was an accurate counter.

CLICK HERE for “Taxes in the Ancient Roman World” article

The fishermen who followed Jesus, and some became His Apostles, had to pay taxes on fishing licenses and perhaps on their daily catch. These Jewish tax collectors were disdained by the Jews. They were considered traitors because they worked for the despised Roman rulers.

Jesus casually says to Levi the tax collector,”follow me” and “Levi got up and followed him.” Just like that. Jesus was very popular in the Capernaum area where He and Levi lived and it is sure Levi had seen and heard the Nazarene. Maybe Jesus had seen Levi often as he sat in his chair with his table, papyrus, quill and ink made from carbon (soot or lampblack), water and gum arabic, a natural gum from the acacia tree used to control the ink’s viscosity when applied to the papyrus. Levi had to keep very accurate records. It is not surprising he watched Jesus carefully and wrote down the first of the four Gospels, the biographies of Jesus of Nazareth.

Levi asked Jesus to come to dinner at his home. When Jesus said He would be there, Levi was so excited he invited lots of his friends. Or Levi was having a lot of friends over for dinner that night and asked Jesus if He would come, too. Jesus came with some of His disciples. There must have been at least 15-20 people eating in Levi’s spacious home. Tax collectors were rich people. But Levi’s guests were of his social ilk—“sinners and other tax collectors.” 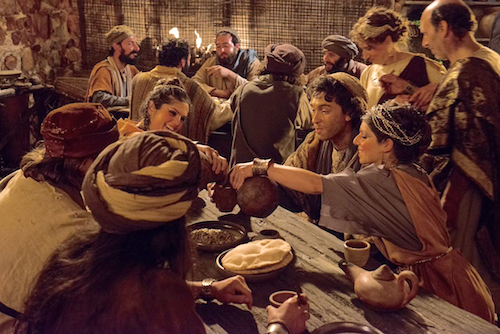 The Pharisees (we get our word “pharisaical” meaning “self-righteous; hypocritical” from this sect in ancient Judaism) were always watching whatever Jesus did and said and they followed him to Levi’s house and were appalled to see Him eating and talking with “tax collectors and sinners.”

Several of Jesus’ other disciples were near. The Pharisees asked them, “Why does he eat with tax collectors and sinners?” On hearing this, Jesus said to them, ’It is not the healthy who need a doctor, but the sick. I have not come to call the righteous, but sinners.’” 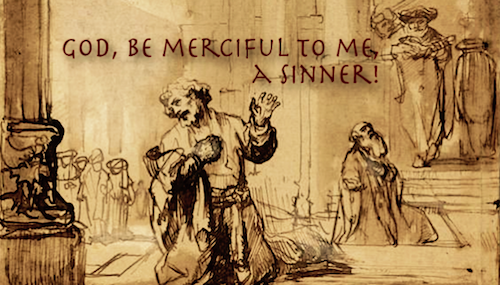 The Gospel of Mark at the beginning of this article is not the only Gospel which gives an account of the calling of the tax collector Levi aka Matthew. Luke, also, describes his calling:

“After this, Jesus went out and saw a tax collector by the name of Levi sitting at his tax booth. ‘Follow me,’ Jesus said to him, and Levi got up, left everything and followed him.

Then Levi held a great banquet for Jesus at his house, and a large crowd of tax collectors and others were eating with them. But the Pharisees and the teachers of the law who belonged to their sect complained to his disciples, ‘Why do you eat and drink with tax collectors and ‘sinners?’ Jesus answered them, ‘It is not the healthy who need a doctor, but the sick.I have not come to call the righteous, but sinners to repentance.” Luke 5:27-32

The fact that three of the four Gospels recount the calling by Jesus of the tax collector Levi is important. Matthew, of course. had his name changed from Levi to Matthew likely by Jesus Himself who changed Simon’s name to Peter.(Matt. 16:18) Mark and Luke were probably stunned by Jesus’ inclusion of a hated tax collector in His Twelve. The other Eleven were ordinary men.

But let’s hear Matthew’s own account of his calling: 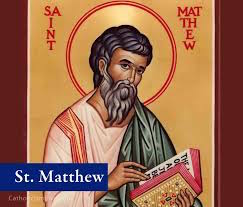 “As Jesus went on from there, he saw a man named Matthew sitting at the tax collector’s booth. ‘Follow me,’ he told him, and Matthew got up and followed him. While Jesus was having dinner at Matthew’s house, many tax collectors and sinners came and ate with him and his disciples. When the Pharisees saw this, they asked his disciples, ‘Why does your teacher eat with tax collectors and sinners?’ On hearing this, Jesus said, “’It is not the healthy who need a doctor, but the sick. But go and learn what this means: ‘I desire mercy, not sacrifice.’ For I have not come to call the righteous, but sinners.’” Matthew 9:9-13

Matthew is the ONLY one of the Gospel writers who uses his changed name from Levi to Matthew. “Levi” meaning “joined” and the name” Matthew” meaning “gift of Yahweh.”

It is touching that Matthew, “gift of Yahweh” loved his new name, probably given to him by Jesus. He was honored that His Lord considered him such a gift,

But as “Levi” he had immediately “joined” his life to Jesus and His Mission. After his conversion, Matthew ardently preached Jesus as Messiah to his Jewish community. He left Judea and carried the Gospel to Ethiopia where he was martyred while celebrating a mass at the altar of a small church he had started. Per tradition, Matthew was killed by by a soldier on the order of the king of Ethiopia. He followed Jesus to his death. The tax collector had already counted the cost.—Sandra Sweeny Silver