When a Christian and others of different faiths begin to eat a meal, they say “GRACE”—they pray before the meal.

“Grace” in English comes from the Latin words gratia meaning “thanks” and gratus, meaning “grateful.” Jesus said Grace in the New Testament. (e.g. Matthew 15:36; 26:25) One remembers the road to Emmaus incident when the resurrected Jesus met two of His disciples and chatted with them. (Luke 24:13-35) They told Him the good news about the resurrection of a certain “Jesus of Nazareth” and how everyone in Jerusalem was talking about it. When the three men stopped for dinner:

“When He was at the table with them, He took bread, gave thanks, broke it and began to give it to them. Then their eyes were opened and they recognized Him, and He disappeared from their sight.” Luke 24:30,31

It was only when Jesus “gave thanks” for the meal, when He said Grace that they recognized they had been traveling with, talking to and eating with “Jesus of Nazareth,” the Resurrected One. 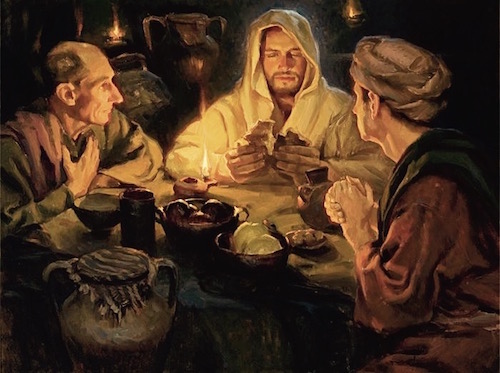 When we say GRACE, when we pray before eating a meal we are, like the unwary disciples, knowingly or not inviting the Lord God to be with us during that meal and are thanking Him for the unmerited Grace of the meal, for the food itself.

Enstrom (1875-1968), a Swedish photographer, took this photo of Charles Wilden in 1918 in Bovey, Minnesota. Wilden is saying grace over a simple meal. In 2002, Enstrom’s photo “Grace” was designated the State Photograph of Minnesota.

All of the four Gospels recount the Feeding of the Five Thousand men plus women and children. Jesus and His apostles had gone to the mountains of Galilee after hearing about the beheading death of John the Baptist.(c. 28,29 AD) Jesus was the most popular Person in His world and His time and many followed Him wherever he went “because they saw the signs he had performed by healing the sick.” That particular Spring day “when the Passover festival was near,” Jesus had healed many of multiple diseases and was resting and talking with His Twelve Apostles on a grassy field.

”Jesus looked up and saw a great crowd coming toward Him.” The Apostles saw the thousands flooding to Him, also. Jesus asked the Apostle Philip who lived nearby where can we go in this deserted place to buy bread for all of these people to eat? Philip replied it would take what a normal man makes in 6 months for each person there to have just a small bite of a loaf of bread. John says in his Gospel that Jesus had asked that question “to test (Philip), for He already had in mind what He was going to do.”

Andrew, Jesus’ first Apostle ((John 1:35–42), had found a little boy whose Godly mother had sent her young son to follow Jesus that day and had packed him a lunch of “five small barley loaves and two small fish” so he would not get hungry. The young boy gave his lunch to Andrew. “There was plenty of grass in that place and they all sat down. Jesus took the loaves, gave thanks and distributed to those who were seated as much as they wanted. He did the same with the fish.” (John 6:11) 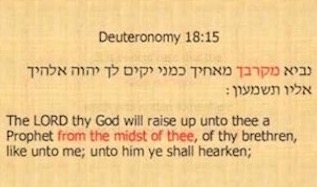 When all had finished the meal, He had His disciples “gather the pieces that are left over. Let nothing be wasted.” All the fish were gone, but pieces of the “five barley loaves” filled twelve baskets. This is an important point. Each of the Twelve Apostles brought the twelve baskets full of left-over bread to the Bread/the real “Manna” from heaven.

This Miracle of Multiplication so astounded the hordes of people they all “began to say, ‘Surely this is the Prophet (Deuteronomy 18:15) who is to come into the world.’” John 6:1-14

The next day Jesus and the Apostles had crossed to the other side of the Lake. When the huge crowd realized that Jesus was not there, they took boats “from Tiberias” which were there and reunited with Jesus in Capernaum where some started asking him questions: “What must we do to do the works God requires?” “What sign then will you give that we may see it and believe you?” “What will you do?” “Our ancestors ate the manna in the wilderness; as it is written: ‘He gave them bread from heaven to eat.’” Exodus 16

Jesus was saying, I AM the miraculous Manna from Heaven. I AM the One Who feeds daily. I AM the One to Whom you say GRACE.—Article by Sandra Sweeny Silver