The ancient Jews, instead of seeking God’s Word and His will, “everyone did what was right in his own eyes.” They had become a “you have your opinion and I have my opinion” nation. (Judges 21:25.) They had abolished TRUTH.

The Jews as a nation had abandoned the God Who had delivered them from Egypt and Who had established their land as a ONE GOD Godly people. (in c. 1450 BC)

There were many “fake gods” in their society whom they worshipped as “gods”—Astarte/Asherah/Ishtar, Baal, Dagon, sun gods, moon gods. etc. They forsook the One True God, Yahweh, Who had established their country and they whored after the pagan gods other countries had.

Astarte is the Hellenized form of the Middle Eastern goddess Astoreth (Northwest Semitic), a form of Ishtar (East Semitic), worshipped from the Bronze Age  (c. 3300 to c.1200 BC) through classical antiquity (8th century BC until the 6th century AD.)

Northern Israel was called Ephraim, the most numerous of the 10 tribes who lived in  the north. Jews from there were taken into Exile by the Assyrians. The Exile of the 10 tribes began in c.740 BC and continued until  c.722 BC.

“The king of Assyria (Tiglath Pileser III) deported Israel to Assyria (in what is now northern Iraq and southeastern Turkey) and settled them in Halah, in Gozan on the Habor River and in towns of the Medes. This happened because they had not obeyed the Lord their God, but had violated his covenant—all that Moses the servant of the Lord commanded. They neither listened to the commands nor carried them out.” II Kings 18:11-12

After the first Assyrian exile (c. 740 BC), the Judean King Hezekiah  (c. 758-687 BC) sent a letter to the remnants of the northern kingdom inviting them to come to Jerusalem in the south and to worship the Lord with their fellow Jews in hopes they would return to the Lord God Jehovah:

“Hezekiah sent word to all Israel and Judah and also wrote letters to Ephraim and Manasseh, inviting them to come to the temple of the Lord in Jerusalem and celebrate the Passover to the Lord, the God of Israel….

“People of Israel, return to the Lord, the God of Abraham, Isaac and Israel (Jacob), that he may return to you who are left, who have escaped from the hand of the kings of Assyria. Do not be like your parents and your fellow Israelites, who were unfaithful to the Lord, the God of their ancestors, so that he made them an object of horror, as you see. Do not be stiff-necked, as your ancestors were; submit to the Lord. Come to his sanctuary (the Temple), which he has consecrated forever. Serve the Lord your God, so that his fierce anger will turn away from you. If you return to the Lord, then your fellow Israelites and your children will be shown compassion by their captors and will return to this land, for the Lord your God is gracious and compassionate. He will not turn his face from you if you return to him.” II Chronicles 30:1-9 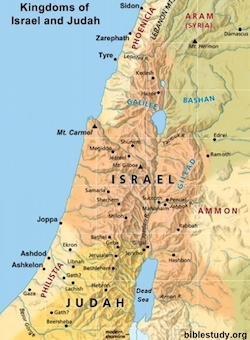 Am sure some of those remaining in northern Israel came and resettled in safer Judea. But no one knows to this day where the 10 tribes of Israel which were taken into Assyrian Captivity are/were. They just vanished into history and that question has not been settled though many over the thousands of years have tried to “settle” it. For those who would like to join the pursuit, look up Ten Lost Tries Of Israel.

After the Godly King Hezekiah died, his son Manasseh (below right) ascended the throne in Judah (reigned  687–643 BC).  It was not “like father like son.” Manasseh did not find a pagan god that he did not love. 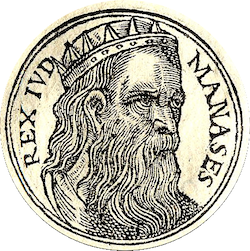 “(Manessah) rebuilt the high places his (Godly) father Hezekiah had destroyed; he also erected altars to Baal and made an Asherah pole, as Ahab king of Israel had done. He bowed down to all the starry hosts and worshiped them. He built altars in the temple of the Lord, of which the Lord had said, “In Jerusalem I will put my Name.” In the two courts of the temple of the Lord, he built altars to all the starry hosts. He sacrificed his own son in the fire, practiced divination, sought omens, and consulted mediums and spiritists.

He did much evil in the eyes of the Lord, arousing his anger. He took the carved Asherah pole he had made and put it in the temple, of which the Lord had said to David and to his son Solomon, “In this temple and in Jerusalem, which I have chosen out of all the tribes of Israel, I will put my Name forever.” II Kings 21:3-7

One wonders why the people did not rise up and dispose of Manasseh.

God sent the prophet Jeremiah to warn the southern tribe, Judah, about its coming Exile to Babylon in 586 BC:

“To whom can I speak and give warning? Who will listen to me? Their ears are closed so they cannot hear. The word of the Lord is offensive to them; they find no pleasure in it. But I am full of the wrath of the Lord,and I cannot hold it in. Pour it out on the children in the street and on the young men gathered together; both husband and wife will be caught in it and the old, those weighed down with years. Their houses will be turned over to others, together with their fields and their wives, when I stretch out my hand against those who live in the land,” declares the Lord. From the least to the greatest, all are greedy for gain; prophets and priests alike, all practice deceit. They dress the wound of my people as though it were not serious. Peace, peace,’ they say, when there is no peace.

Are they ashamed of their detestable conduct? No, they have no shame at all; they do not even know how to blush. So they will fall among the fallen; they will be brought down when I punish them, says the Lord.” Jeremiah 6:1-15

God did send prophets to the Jews (Isaiah, Jeremiah, etc.) but the people did not listen to them and continued their rebellion against God. In 586 BC Judah went into the Babylonian Exile and Jerusalem was plundered and destroyed. 70 years later, the Jews were able to enter their homeland again when Cyrus the Great conquered Babylon and released them.

In our own culture, drugs are a problem. Many, many parents have struggled with children who become addicted. The parents try every thing imagined to help their children to “kick the habit.” Hundred and thousands of dollars have been spent to “save their children.” Some of the time and maybe most of the time the money spent and, most importantly, the untold anguish and moment by moment thoughts and prayers for their children, do not WORK. As a LAST CHANCE, the distraught parents are sometimes counseled to try TOUGH LOVE—“kick your child out of your house.”  Some have done so and sometimes it works.

The Lord God Almighty is extremely PATIENT with His people. He gives us CHOICE and often we, like the ancient Jews, turn away from Him, kick Him out of our culture and forge our own present and future without Him. He sends to us, like He did to His ancient people, many “truth-tellers.” We often “mock” them like they did in ancient times. Occasionally, as Jewish history has shown, God just “kicks us out of the house.” 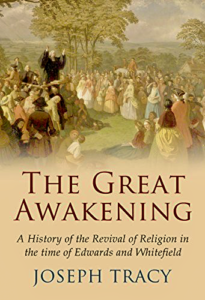 That did not seem to work with Northern Israel. They became anonymous in history. But Judah in the South cleaned themselves up (BUT it took 70 years in the Babylonian Captivity!) and returned as repentants to their home in Jerusalem and relied again on their Father God. Things were “normal” again. Judah had had a Great Awakening.—Sandra Sweeny Silver