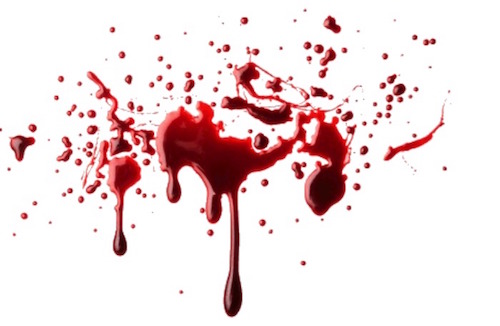 “Jesus went out as usual to the Mount of Olives, and his disciples followed him. On reaching the place, he said to them, ‘Pray that you will not fall into temptation.’ He withdrew about a stone’s throw beyond them, knelt down and prayed,  ‘Father, if you are willing, take this cup from me; yet not my will, but yours be done.’ An angel from heaven appeared to him and strengthened him. And being in anguish, he prayed more earnestly, and his sweat was like drops of blood falling to the ground. When he rose from prayer and went back to the disciples, he found them asleep, exhausted from sorrow. ‘Why are you sleeping?’ he asked them. ‘Get up and pray so that you will not fall into temptation.’ While he was still speaking a crowd came up, and the man who was called Judas, one of the Twelve, was leading them. He approached Jesus to kiss him, but Jesus asked him, ‘Judas, are you betraying the Son of Man with a kiss?’” Luke 22:39-48

Paul’s traveling companion was a medical doctor named Luke (Colossians 4:14), the author of one of the four biographies of Jesus in the New Testament. The Doctor wrote the only Gospel that mentions this medical condition that occurred in Gethsemane.

Because Jesus cured many physical diseases, the physician Dr. Luke, more than the other three biographers, focused on the specifics of the “physical” healings of Jesus: e.g. a crippling spinal condition (Luke 13:11) and Jesus’ healing of the severed right ear of the servant of the high priest in Luke 22:50,51.

Dr. Luke, the only Gentile to write books in the Bible, is the biographer who mentions in the beginning of the Gethsemane passage that Jesus “being in anguish, prayed more earnestly and his sweat was like drops of blood falling to the ground.” Is this hyperbole or could it be possible that Jesus actually sweated blood during his ordeal in Gethsemane?

Yes, it is probable. There is a very rare disorder called Hematidrosis: “excretion of blood or blood pigment in the sweat….An extremely rare condition characterized by the sweating of blood which is said to occur when a person is facing death or other highly stressful conditions.” Only Luke, the physician, mentioned this part of His Passion because it is of medical significance.

There have been other cases where people have “sweated actual blood:” e.g. before execution, during the London blitz in WW II, the case of a lady who was being raped, a sailor broke into bloody sweat during a storm at sea. An 11-year-old child in 1918 had hematidrosis frequently. Upon microscopic examination by Dr. C.T. Scott, her sweat revealed red blood corpuscles and some white corpuscles. The explanation seems to be that under conditions of great emotional/physical stress tiny capillaries in the sweat glands can rupture. Blood is thus mingled with perspiration.

“A 12-year-old girl (below left)…with a history of bleeding from the intact skin over the forehead, scalp, cheek, nose, and trunk…each episode started with mild watery secretion over the forehead or other body parts, followed immediately with bright-red colored secretion of watery blood.”

If one examines the Greek in Jesus’ particular instance of hematidrosis, one finds the condition is one of great emotional distress. Jesus knew that Judas was going to betray Him/hand Him over to the Jewish authorities. That was clear at the Last Supper in John 13:21 when “Jesus was troubled in his spirit.” The Greek word for “troubled” is etarachthe meaning “to strike one’s spirit with fear and dread, take away calmness, render anxious or distressed.”

Already before Gethsemane, Jesus was fearful, in dread of what He had to undergo. After the Last Supper, “Jesus went out as usual to the Mount of Olives, and his disciples followed him. On reaching the place, he said to them, ‘Pray that you will not fall into temptation.’ He withdrew about a stone’s throw beyond them, knelt down and prayed, ‘Father, if you are willing, take this cup from me; yet not my will, but yours be done.’ An angel from heaven appeared to him and strengthened him. And being in anguish, he prayed more earnestly, and his sweat was like drops of blood falling to the ground.” Luke 22:39-44

Jesus and his disciples went to the Garden called Gethsemane at the foot of the Mount of Olives. (Matthew 26:36; Mark 14:32; John 18:1) “Gethsemane” comes from two Hebrew words: gat meaning “a place for pressing” and shemanim meaning “oils.” “Gethsemane,” the place for pressing the essential oils out of olives, is an apt name for the place where Jesus was wrung out and first shed His Blood.

In these Biblical verses Jesus is the Son of Man. He is afraid. He is dreading the propitiation sacrifice He came to offer. He pleads with His Father to “take this cup from me,” to find another way to expiate sin. Knowing there is no “other way,” He acquiesces to the way it had to be. So in trouble is Jesus in His human mind and body that “an angel” is sent to “strengthen Him.” The word in Greek for “strengthen” is enischyon meaning “”being strong enough to face necessary confrontation (engage resistance).” The angel gives him the strength to carry on, but Jesus is still “in anguish.” The Greek word here for “anguish” is agonia meaning “the feeling of the athlete before a contest; great fear, terror, anxiety.” We get our word “agony” from agonia. In English “agony” is “extreme physical or mental suffering.”

Jesus anguishes in prayer: “And being in anguish, he prayed more earnestly.” Through prayer Jesus fights the human desire to turn away from His mission, to abandon the cause. While in prayer, “he prayed more earnestly, and his sweat was like drops of blood falling to the ground.” Jesus literally “sweats blood.” The Greek word for “sweat” is idros and it is combined in the Greek with auto meaning “His,” “His sweat.” Egeneto de aimatos means “to become in reality blood.” The English translation here “was like drops of blood” makes it appear as though sweating blood is a metaphor or a simile. In the Greek it is clear that His sweat was blood. (The condition called hematidrosis.) And it was not the casual sweating of a hot Judean night. His bloody sweat was pouring off of Him and falling to the ground.

It is tempting to go into the theology or other speculations about Jesus’ agony in the Garden of Gethsemane: man fell in a Garden/was redeemed in a Garden, etc. The purpose of this article, however, is to show the redemption of man was hard-fought by Jesus, was agonizing, was won in a Garden on His knees with blood dripping from His body, was a bloody sacrifice for us that started in Gethsemane and ended with a bloody Body nailed to a bloody Cross.

“In fact, the law requires that nearly everything be cleansed with blood, and without the shedding of blood there is no forgiveness.” Hebrews 9:22—Article By Sandra Sweeny Silver

This powerful 4 minute video may not be suitable for children