In the New Testament the Holy Spirit Comes at Pentecost from the Greek word Πεντηκοστή meaning “fiftieth”.

It was a Jewish Festival celebrated 50 (pente) days after Passover. That Jewish Spring Festival known as Shavuot is still celebrated today. In the Bible (Leviticus 23 and 24) the Festival celebrates the “first fruits of the wheat harvest’ and “the giving of the Torah to Moses on Mt. Sinai.”

The Bible recounts that day in c.30 AD, 50 days after Resurrection Sunday:

“When the day of Pentecost came, they (Apostles and others ) were all together in one place. Suddenly a sound like the blowing of a violent wind came from heaven and filled the whole house where they were sitting. They (12 Apostles) saw what seemed to be tongues of fire that separated and came to rest on each of them. All of them were filled with the Holy Spirit and began to speak in other tongues (languages) as the Spirit enabled them. 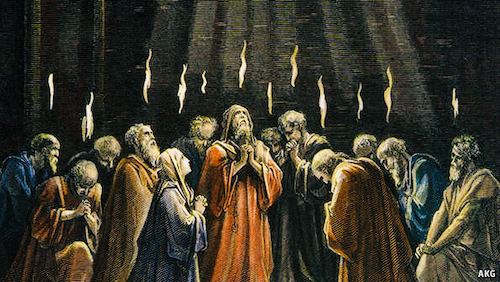 Now there were staying in Jerusalem God-fearing Jews from every nation under heaven. When they heard this sound, a crowd came together in bewilderment, because each one heard their own language being spoken. Utterly amazed, they asked: ‘Aren’t all these who are speaking Galileans? Then how is it that each of us hears them in our native language? Parthians, Medes and Elamites; residents of Mesopotamia, Judea and Cappadocia, Pontus and Asia, Phrygia and Pamphylia, Egypt and the parts of Libya near Cyrene; visitors from Rome (both Jews and converts to Judaism); Cretans and Arabs—we hear them declaring the wonders of God in our own tongues!’

Amazed and perplexed, they (the visitors to Jerusalem) asked one another, ‘What does this mean?’” Acts 1:2-12 NIV

The Holy Spirit is from the Greek words Άγιο πνεύμα (agio pneuma) which means “sacred wind/spirit.” One sees the English word “pneumonia” in that second word. Pneumonia is an inflammation of the lung, our wind/breathing organ. Without functioning lungs, we have “breathed our last breath.”

In Genesis 2:7 God created Man: “And the LORD God formed man of the dust of the ground, and breathed into his nostrils the breath of life; and man became a living soul.”

It would be interesting to plumb the meaning of God’s giving Man His Own “Breath” (Hebrew ruah) and man becoming “a living soul” (Hebrew nepesh) and the  coming of the Holy Spirit at Pentecost as a “Mighty Wind.” But our purpose is to discern what languages were spoken by the Apostles and others who were” declaring the wonders of God in our (their) own tongues,” as the many said. This miracle of “tongues/languages” resulted in the conversion to Christ of “3,000 people” (Acts 2:41.) That was a huge Spring Harvest!

Hundreds of thousands of Jews and proselytes came to Jerusalem for all the major Jewish Festivals.

In Jerusalem the languages frequently spoken were Hebrew and Aramaic. Aramaic was the local dialect closely related to the Hebrew and other Middle Eastern languages. Hebrew was known by most literate Jews who studied their Scriptures.

Other languages which were often spoken and understood were Greek and Latin. Alexander the Great (356–323 BC) who conquered the known world in his conquests spread the knowledge of the Greek language all over the world of his time. Much business and trading were done in Greek.

Latin was, also, a current language because at the time of Jesus (c. 4 BC—c. 30 AD) the Latin-speaking Romans ruled most of the world. In our modern world the lingua franca, “any language that is widely used as a means of communication among speakers of other languages,” is English which is universally used in culture, diplomacy and commerce. According to some estimates, almost 80 percent of English speakers in the world are non-native speakers. Seems America and its English language has permeated most of the world in the 21st century.

If one looks up the many peoples who were coming to Jerusalem for the celebration of Pentecost almost 2,000 years ago in c. 30 AD,  one finds most of them had a smattering of two languages—Greek and Latin. The reason for that is:  Greeks until Alexander the Great were not very significant world-wide. But when that young man (died age 33) marched his armies out of Greece, they conquered all from Egypt  throughout Europe and  the Middle East to India’s borders. And Greek culture and language became known and used by all the world throughout Europe and  the Middle East.

The other languages miraculously spoken by the Apostles at that Pentecost to worshipers from different parts of the world were:

“Xenolalia” is “the ability to speak in a language which the individual has not learned.” The “rushing mighty wind” (KJV) in that room at Pentecost in c. 30 AD, that Holy Spirit of God was a phenomenon (“an extra ordinary” event) which changed the lives of 3,000 converts and helped launch the world-wide Christian movement.

“The Spirit of God has made me; the breath of the Almighty gives me life.” Job 33:4—Article by Sandra Sweeny Silver