The definition of a caduceus is a staff from ancient times which shows one or two serpents coiled around a staff. Its symbol is a medical one. The word itself means “herald.”

The original caduceus is of Biblical origin—a rod with a brass snake on it. The Greeks over a thousand years later gave their god Hermes a rod with wings on the top and two snakes entwined around it. But their god of healing, Ascelpius, had the same rod and snake that Moses had made.

The first appearance of the symbol, especially in relation to healing, is found in the Jewish Tanakh during the Jews’ Wandering in the Wilderness in c. 1400’s BC. The Old Testament states:

“The people spoke against God and against Moses, Why have you brought us up out of Egypt to die in this desert, for there is no bread and no water, and we are disgusted with this rotten bread. And the Lord sent fiery serpents among the people, and they bit the people; and many people of Israel died. Therefore the people came to Moses and said, We have sinned, for we have spoken against the Lord and against you; pray to the Lord, that He take away the serpents from us. And Moses prayed for the people. And the Lord said to Moses, Make a fiery serpent, and set it upon a pole: and it shall come to pass that everyone that is bitten, when he looks upon it, shall live. And Moses made a serpent of brass, and put it upon a pole, and it came to pass that if a serpent had bitten any man, when he beheld the serpent of brass, he lived.” Numbers 21:5-9 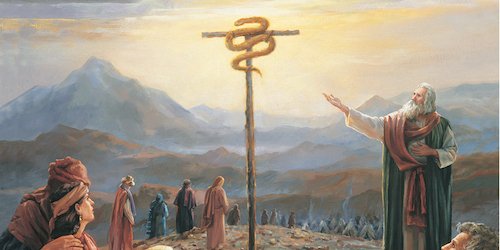 About a thousand years later in c. 550 BC, the Jews had preserved not only Moses’ five books of the Torah and other of their prophets’ writings, but had preserved the serpent of brass on a pole which Moses long ago had made as a mark of healing for the Jews:

“In the third year of Hoshea son of Elah king of Israel, Hezekiah son of Ahaz king of Judah began to reign. He was twenty-five years old when he became king, and he reigned in Jerusalem twenty-nine years. His mother’s name was Abijah daughter of Zechariah. (Hezekiah) did what was right in the eyes of the Lord, just as his father David had done. He removed the high places, smashed the sacred stones and cut down the Asherah poles. He broke into pieces the bronze snake Moses had made, for up to that time the Israelites had been burning incense to it. It was called Nehushtan.” 2 Kings 18: 1-4

The Jews had forgotten the history of the brazen snake on a pole and since it was such a long time since the meaning was taught, they had been worshipping it as a pagan symbol. They even burned incense to it as they were doing for all their pagan gods. “It” had a name “Nehushtan” which is a derogatory name in Hebrew meaning “a mere piece of brass/ a brazen thing.” The “right in the eyes of the Lord” King Hezekiah tore it down and rid Israel of all the rest of its pagan idols.

The Jews have written proofs of their founding and history from the 1400’s BC forward to Now.

CLICK HERE for article on the Dead Sea Scrolls

On the left below is Iris. In Greek mythology she is the personification of the rainbow and  a messenger of the gods. Here she displays the Moses caduceus in detail. On the right is a coin from Sardis (Turkey) with a caduceus (c. 140-144 AD).

The caduceus has always been a medical/saving lives symbol. The adoption, in 1902, of the caduceus for US Army medical officer uniforms popularized the use of the symbol throughout the medical field in the United States. There are today many countries and organizations which  have the caduceus as their logos.

During the pandemic of deadly snakes when the Jews were in the wilderness, many  people were dying from their venomous bites. They came to Moses and said,..

“We have sinned, for we have spoken against the Lord.”  They repented their sins. God, Who is ALL-FORGIVING, told Moses: 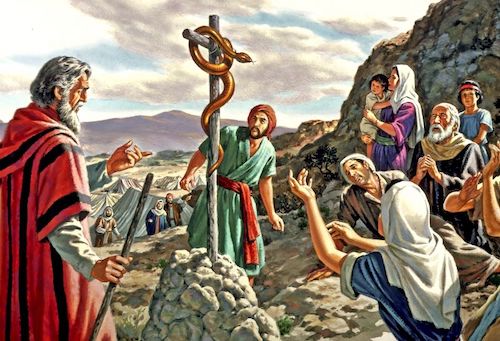 It is interesting that Jesus took those very verses from those Scriptures, written 1,400 years before He was born, and identified Himself with the caduceus, with the snake on a pole.

He said, “Just as Moses lifted up the snake in the wilderness, so the Son of Man must be lifted up, that everyone who believes may have eternal life in him.” John 3:14, 15

We are all dying by the snake bites of our sins. The world is an evil place and there are many temptations, delights and false “prophets” that lure us into their deadly dens. Jesus took all my/your/our sins when He was willingly lifted up on the Cross. He was born to die for me/you on that old Rugged Cross.

“When we confess our sins, He is Faithful and Just to forgive us our sins and to cleanse us from all unrighteousness.” 1 John 1:9

After the Jews confessed their sins, “it came to pass that if a serpent had bitten any man, when he beheld the serpent of brass, he lived.”

“And I, when I am lifted up from the earth, will draw all people to myself.” John 12:32—Article by Sandra Sweeny Silver 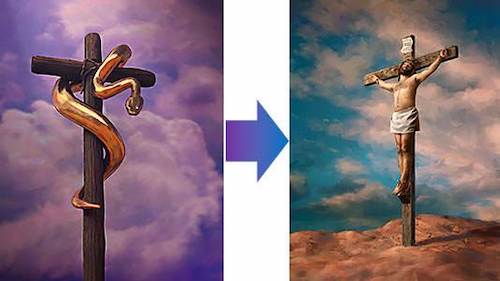