War has been, is and will be a constant in the lives of people. In the first three centuries AD, Romans and Christians alike fought in many wars and were killed in many wars. War doesn’t know or care who you are. The most common engine of war in the ancient world and all the way through to the Middle Ages was the battering ram.

Josephus On The Battering Ram 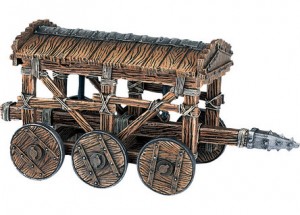 “This battering ram is a vast beam of wood like the mast of a ship; its forepart is armed with a thick piece of iron at the head of it which is so carved as to be like the head of a ram, whence its name is taken. This ram is slung in the air by ropes passing over its middle, and is hung like the balance in a pair of scales from another beam and braced by strong beams that pass on both sides of it in the nature of a cross. When this ram is pulled backward by a great number of men with united force and then thrust forward by the same men, with a mighty noise it batters the walls with that iron part which is prominent; nor is there any tower so strong or walls so broad that can resist any more than its first batteries.” Josephus, The Jewish War 3.7.19 (c. 78 AD) 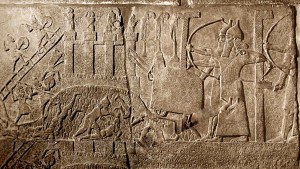 The battering ram was a siege engine used in warfare for over a thousand years before the Romans came on the scene in the 7th century BC. Reliefs on buildings from the 19th century BC show battering rams. There are excellently preserved reliefs on the palace walls of Tiglath-Pileser III (reigned 745-727 BC) at ancient Nimrod near the modern city of Noomenea in Iraq, 19 miles southeast of Mosul. One shows an ancient battering ram and the impaled bodies of the conquered soldiers.

The Mari Documents (c. 2800-1700 BC) were discovered in the 1930’s in the ancient city of Mari in Syria. During excavation, French archeologists found an enormous palace covering 16.2 acres with over 260 rooms, courtyards and corridors. The major find was a cache of over 20,000 baked clay tablets in cuneiform script, the most ancient system of writing. The tablets revealed all about their social, legal and economic system as well as some literary and religious texts. We were able to decipher these texts thanks to Sir Henry Rawlinson, a British political agent in Baghdad, who in 1835 deciphered  cuneiform script. The Mari Documents spoke of battering rams. One Assyrian general sent a “letter/clay tablet” saying: “Thus saith Ishme-Dagan, thy brother! After I conquered (three cities), I turned and laid siege to Hurara. I set against it the siege towers and battering rams and in seven days I vanquished it. Be pleased!” As you can see, battering rams were around thousands of years before Rome used them at the Battle for Jerusalem in 70 AD. 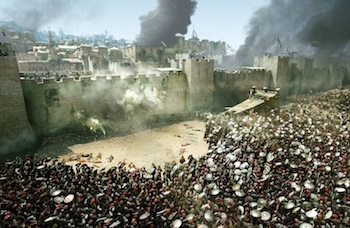 During the Battle for Jerusalem, General Titus (who would later become Emperor Titus) fought the Jews with all the weapons the Romans had and still it took them over five months to vanquish the Jews. They had a huge, but not improved upon, battering ram called Victor that pummeled the wall of Jerusalem day after day after day. The Jews built a second wall and then a third wall to keep the Romans at bay should they shatter the main wall with their battering ram. The Romans had another weapon, a catapult called Onanger meaning “wild ass” because of the powerful kick the catapult generated by the recoil as the machine released stones. The Onanger catapulted 75 lb. stones over 1,300 feet:

“The stones that were cast were of the weight of a talent (c. 71lbs.) and were carried two furlongs (1,320 feet) and farther. The blow they gave was no way to be sustained, not only by those that stood first in the way, but by those that were beyond them for a great space. As for the Jews, they at first watched the coming of the stone, for it was of a white color and could therefore not only be perceived by the great noise it made, but could be seen also before it came by its brightness. Accordingly when the watchmen that sat upon the towers gave them notice when the engine was let go and the stone came from it, they cried out aloud in their own country language (Aramaic), ‘The son cometh.’” Josephus, The JewishWar 5.6.3

In spite of the catapult Onanger and the battering rams, the Jews were almost invincible and the famed Roman legions quaked in their boots from time to time. Josephus who was present during the Battle does a thorough job in his The Jewish War describing for his readers the blow by blow taking of and then destruction of Jerusalem by the Romans in 70 AD. 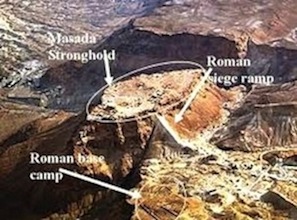 some say) again in 73-74 AD at a location in southern Israel called Masada, an isolated rock plateau in the Judean desert. After months of siege, the Romans finally got their battering rams and other equipment up the ramp they had built to the 1,300 feet above sea level top of Masada. They found not one living soul. All 960 of the Jewish zealots were dead by suicide. The siege ramp for the battering rams is still visible today.—Sandra Sweeny Silver

CLICK HERE to watch a three minute Science Channel video on the construction and performance of the Roman Catapult.