In 14 AD when Caesar Augustus, the first Emperor of Rome, died at age 75, Jesus of Nazareth was in his late teens (born c. 6-4 BC). Augustus aka Octavian (birth name) was c. 57 when Jesus was born and had been Caesar since he was 36 when he began his reign in 27 BC. The Biblical Gospel of Luke (c. 59-63), one of the      four biographies of Jesus, was always pinning Biblical happenings to other contemporary global men and markers.

The doctor, Luke, mentions Caesar Augustus as being Emperor of Rome when Jesus was born:

“In those days Caesar Augustus issued a decree that a census should be taken of the entire Roman world. (This was the first census that took place while Quirinius was governor of Syria.) And everyone went to their own town to register. So Joseph also went up from the town of Nazareth in Galilee to Judea, to Bethlehem the town of David, because he belonged to the house and line of David. He went there to register with Mary, who was pledged to be married to him and was expecting a child.” Luke 2:1-5

Augustus was designated by his great-uncle Julius Caesar to be his heir. When Julius Caesar was assassinated in 44 BC, Octavian consolidated the fractured Roman Empire and became “Augustus,” meaning “majestic, great, illustrious one, respected one” of Rome. 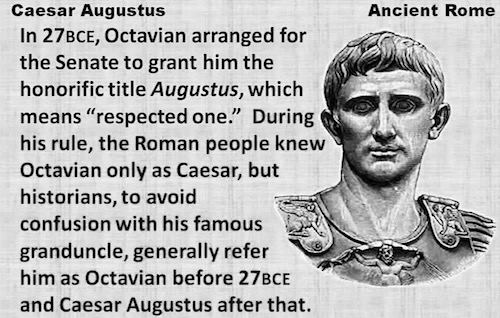 He refused to be deified as Julius Caesar had himself declared and Augustus’ rule was a benign and kind one. He took the Roman Empire from a Republic to a Monarchy. He was the first Emperor of Rome and possibly the best of the official 71 Emperors. Because of his family connection to the Caesars, all other Emperors of Rome were called “Caesar.” Julius Caesar lived on.

As has Augustus. As he reigned and right before Augustus died in 14 AD, he had written a record of his good deeds as Emperor—Res Gestae Divi Augusti, The Deeds of the Divine Augustus.

After his death many copies of his Deeds were carved on temples and monuments throughout the Roman Empire. Some survive in part, but at Ankara, Turkey a full text of his Deeds were found in a temple dedicated to Augustus. Written in Latin and Greek, it is called Momumentum Ancyranum of Ankara.

The following is a partial list of Augustus’ accomplishments as the First Emperor of Rome written by his own hand:

“In my nineteenth year, on my own initiative and at my own expense, I raised an army with which I set free the state, which was oppressed by the domination of a faction. For that reason, the senate enrolled me in its order by laudatory resolutions, when Gaius Pansa and Aulus Hirtius were consuls (43 BC), assigning me the place of a consul in the giving of opinions, and gave me the imperium.”

“I often waged war, civil and foreign, on the earth and sea, in the whole wide world, and as victor I spared all the citizens who sought pardon. As for foreign nations, those which I was able to safely forgive, I preferred to preserve than to destroy. About five hundred thousand Roman citizens were sworn to me. I led something more than three hundred thousand of them into colonies and I returned them to their cities, after their stipend had been earned, and I assigned all of them fields or gave them money for their military service. I captured six hundred ships in addition to those smaller than triremes”.

“When the dictatorship was offered to me, both in my presence and my absence, by the people and senate, when Marcus Marcellus and Lucius Arruntius were consuls (22 BC), I did not accept it. I did not evade the curatorship of grain in the height of the food shortage, which I so arranged that within a few days I freed the entire city from the present fear and danger by my own expense and administration. When the annual and perpetual consulate was then again offered to me, I did not accept it.”

“I was triumvir for the settling of the state for ten continuous years. I was first of the senate up to that day on which I wrote this, for forty years. I was high priest, augur, one of the Fifteen for the performance of rites, one of the Seven of the sacred feasts, brother of Arvis, fellow of Titus, and Fetial.”

Because of the high number of people in the censuses there is some speculation that the censuses taken by Augustus were Empire-wide and not just of the population of Rome. But during a 1941 excavation at Ostia, Italy at the mouth of the Tiber River, an inscription was found indicating that at the time of Augustus’ successor Tiberias (14-37 AD), the population of Rome was 4,100,000. So there were many more millions in ancient Rome than some historians think there were.

“By new laws passed with my sponsorship, I restored many traditions of the ancestors, which were falling into disuse in our age, and myself I handed on precedents of many things to be imitated in later generations.” (Augustus was very concerned about family and morals even though most of his own family were not moral,)

“I paid to the Roman plebs, HS 300 per man (HS means sesterius, the ancient Roman money)) from my father’s will and in my own name gave HS 400 from the spoils of war when I was consul for the fifth time (29 BC); furthermore I again paid out a public gift of HS 400 per man, in my tenth consulate (24 BC), from my own patrimony; and, when consul for the eleventh time (23 BC), twelve doles of grain personally bought were measured out; and in my twelfth year of tribunician power (12-11 BC) I gave HS 400 per man for the third time. And these public gifts of mine never reached fewer than 250,000 men. In my eighteenth year of tribunician power, as consul for the twelfth time (5 BC), I gave to 320,000 plebs of the city HS 240 per man. And, when consul the fifth time (29 BC), I gave from my war-spoils to colonies of my soldiers each HS 1000 per man; about 120,000 men i the colonies received this triumphal public gift. Consul for the thirteenth time (2 BC), I gave HS 240 to the plebs who then received the public grain; they were a few more than 200,000.” 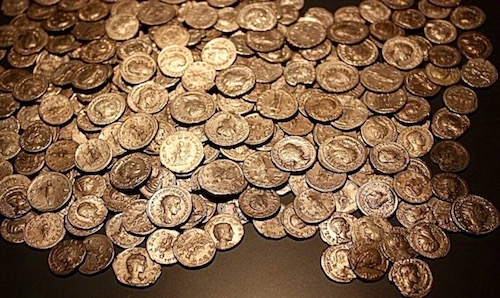 Augustus goes on and on about his, indeed, “good deeds.” There was an Appendix appended to Augustus’ Deeds after he died:

“1. All the expenditures which he gave either into the treasury or to the Roman plebs or to discharged soldiers: HS 2,400,000,000. (4 billion, four hundred million! He was a very generous ruler. It was expensive to be CAESAR).

2. The works he built: the temples of Mars, of Jupiter Subduer and Thunderer, of Apollo, of divine Julius, of Minerva, of Queen Juno, of Jupiter Liberator, of the Lares, of the gods of the Penates, of Youth, and of the Great Mother, the Lupercal, the state box at the circus, the senate-house with the Chalcidicum, the forum of Augustus, the Julian basilica, the theater of Marcellus, the Octavian portico, and the grove of the Caesars across the Tiber.

3. He rebuilt the Capitol and holy temples numbering eighty-two, the theater of Pompey, waterways, and the Flaminian road.

4. The sum expended on theatrical spectacles and gladiatorial games and athletes and hunts and mock naval battles and money given to colonies, cities, and towns destroyed by earthquake and fire or per man to friends and senators, whom he raised to the senate rating: innumerable.”

Below is a list of the Caesars mentioned in New Testament

Augustus Caesar—reigned 27 BC until his death in AD 14.

“Now in those days a decree went out from Caesar Augustus, that a census be taken of all the inhabited earth.”
Luke 2:1

“Now in the fifteenth year of the reign of Tiberius Caesar (29 AD), when Pontius Pilate was governor of Judea, and Herod was tetrarch of Galilee, and his brother Philip was tetrarch of the region of Ituraea and Trachonitis, and Lysanias was tetrarch of Abilene…”
Luke 3:1

“So the spies questioned (Jesus): ‘Teacher, we know that you speak and teach what is right, and that you do not show partiality but teach the way of God in accordance with the truth. Is it right for us to pay taxes to Caesar or not?’ He saw through their duplicity and said to them, ‘Show me a denarius. Whose image and inscription are on it?’ ‘Caesar’s,’ they replied. He said to them, ‘Then give back to Caesar what is Caesar’s, and to God what is God’s.’” Luke 20:21-25
The Caesar during that encounter was Tiberius.

“One of them named Agabus stood up and began to indicate by the Spirit that there would certainly be a great famine all over the world And this took place in the reign of Claudius.” Acts 11:28

“And he found a Jew named Aquila, a native of Pontus, having recently come from Italy with his wife Priscilla, because Claudius had commanded all the Jews to leave Rome. He came to them…” Acts 18:2 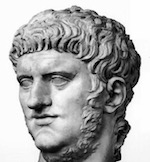 The historian Suetonius describes Nero as “about the average height, his body marked with spots and malodorous, his hair light blond, his features regular rather than attractive, his eyes blue and somewhat weak, his neck over thick, his belly prominent, and his legs very slender.” Lives of the Twelve Caesars

“All the saints greet you, especially those of Caesar’s household.” Philippians 4:22 (written c. 62 AD during Nero’s reign)

Highly recommended for those interested in the glory, gore and degradation of the Roman Emperors: The Video BBC Series I Claudius—Article by Sandra Sweeny Silver

A short classic cut from the I Claudius series featuring John Hurt (1940-2017) as the depraved and insane Emperor Caligula (from 37 to 41 when he was assassinated).