There have always been trails and routes. The American Indians had thousands of miles of well-worn trails all over America.

Early trappers and traders used Indian trails to bring their goods to market. The pioneers followed the Oregon Trail and other Indian trails as they went west. On the other side of the world the ancient Chinese had their routes: the fabled Silk Road from China to the Mediterranean Sea and The Tea Horse Road from Tibet to India. 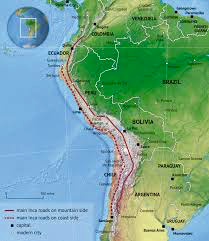 The Incas of Peru had 14,000 miles of trails the most famous of which was the 3,200 mile Camino Real from Quito, Ecuador to Tucaman, Argentina (left in red).

People everywhere have always traveled. All cultures had trails and routes.

Roman roads were built to last. Roman roads and structures have survived for millennia for one reason—cement. The Romans “invented” cement (Latin caementum). Roman cement made possible the durability of Roman roads and revolutionized architecture by enabling previously impossible construction like the enormous domed and vaulted spaces of the Pantheon and all the Imperial Baths. 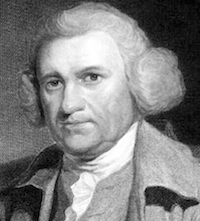 After the demise of the Roman Empire in the late 400”s, the formula for cement was lost until John Seaton (left), a British engineer, rediscovered it in 1756 by mixing clay with limestone.

To build the Roman roads, a foundation pit was dug and filled with carefully placed rocks. Then broken stones, cement and sand were laid down. Another layer of cement mixed with broken tiles was added. The roads were surfaced with stone paving blocks crowned to shed water. Curb stones at the sides held the paving blocks in place. On either side of the road were drainage ditches.

The roads were built to move conquering armies and to facilitate communications and supplies from one end of Rome’s vast empire to its most remote frontiers. Every long stretch of road had mutationes for changing horses and mansiones for lodging at night. Julius Caesar and his army traveled so fast on those roads that it took them only eight days to go from Rome to the Rhone. By using the relay and refreshment stations all along the highways, couriers could cover 500 miles on horseback in just 24 hours.

Rome’s roads carried official documents, personal letters and news from Rome to all parts of the Empire. The Via Appia, called the “queen of roads” (Latin regina viarum), was built in c. 312 BC by Appius Claudius when he was Censor (in charge of taking the census and of public morality) of Rome. Normal, unofficial communications traveled the 266 miles from Rome to Brindisi on that road in about six days and visitors to Rome today still travel to some of the catacombs on the Via Appia.

Official orders and military communications from Rome took only 33 days to go all the way to the Roman colony in Britain called Londinium by the Romans, a distance of c. 900 miles. London seems to have been derived not from a Latin word but from a pre-Celtic word Lonidonjon meaning “boat river” or “swimming river.” The Romans established Londinium on the Thames River and seemed to have Latinized the word the native Britons were using. The origin of the word “London” is hotly debated in circles where these things are important.

Many Roman roads have survived. The ancient Roman Via Emilia is today the SS9 superhighway that leads to the Adriatic coast. The Roman road from Dover to London now called Watling Street was used all through the Dark Ages, the Middle Ages, during the Renaissance and part of it is still used today.

If there was a river to span, the Romans built a bridge over it and their armies walked over it to attack and to broaden their empire.

The Alcantara Bridge, over the Tagus River, was built in 106 AD, and carries the inscription “Pontem perpetui mansurum in saecula,” or “I have built a bridge which will last forever.” As you can see, 2,000 yeas later the Bridge holds fast.

In Jordan the milestones of the Roman Via Traiana are still standing and the road is semi-passable. All over the world today ruins of Roman roads are still in existence: in Turkey, Syria, Israel, Ireland, France, Germany, England.

Currently the Interstate System of major roads in the Unites States of America is 46,876. The Romans built over 50,000 miles of roads.

The Biblical Apostle Paul (died 64—67 AD in his 60’s) travelled on foot on those Roman Roads more than 10,000 miles spreading the Gospel of the Resurrection of Christ. That’s the equivalent of walking to and from New York City to Los Angeles nearly four times!—Sandra Sweeny Silver